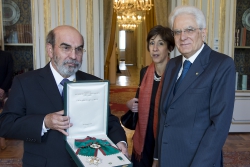 ROME – As FAO’s press office trumpeted José Graziano da Silva’s glorious receipt of an Italian ‘knightship,’ the UN agency director general in a major speech on Africa airbrushed out his links on the continent to his mentor former Brazilian President Ignacio Lula da Silva who is at the centre of a huge corruption scandal in their homeland.

Graziano travelled to the Quirinal Palace last week to become a  Cavaliere di Gran Croce dell'Ordine al Merito della Repubblica while his unctuous Uruguayan cabinet chief, Mario Lubetkin, became a commendatore.  Lubetkin also holds Italian citizenship and was Uruguay's ambassador to the FAO at the same time as he headed the embattled IPS news agency before jumping ship to FAO.

The FAO honchos may be flavour of the month with Italian President Sergio Mattarella but Graziano’s former boss Lula did not merit a mention in a speech the Brazilian DG delivered in Abidjan April 7 at the official opening of the regional conference on Africa.

“Africa has made great strides in tackling hunger -- achieving a 30 percent drop in the proportion of its people facing hunger over the 1990-2015 period,” Graziano said. “But climate change, conflict and social inequality continue to present major challenges in the continent's quest for a future free from hunger and want.”

The FAO under Graziano's stewardship has started what was billed by the UN agency as  a major partnership with the Lula Institute and the African Union "to end hunger on the continent by 2025."

But oddly Graziano made no reference to the Lula Institute’s major role in the ambitious goal, according to the FAO verbatim text of the speech in French and English on its website.

Diplomatic sources said Graziano evidently is seeking to downplay publicly his links to his former boss who hired him as a minister in the Brazilian government and then backed his appointment to head the FAO operation in Latin America.

A supreme court judge in Brazil last month blocked Lula da Silva’s appointment to the Brazilian cabinet, paving the way for him to face corruption charges in court. Judge Gilmar Mendes wrote that Lula’s appointment to cabinet was clearly designed to allow him to avoid possible imprisonment by a lower court judge. Supreme court judges were due to decide finally Wednesday on whether Lula can take up the appointment in embattled president Dilma Rousseff’s government.

There has been persistent speculation that Graziano is considering offering Lula a job in Rome as one of the constellation of special advisors at the Rome-based poverty-fighting agency who enjoy salaries of dlrs 20,000 a month and generous benefits.  As a UN employee Lula could enjoy immunity from prosecution. Lula’s wife already has Italian citizenship meaning he could also take Italian nationality to provide a further barrier against eventual extradition proceedings.

Prosecutors in Brazil say they have evidence that Lula, members of his family and the Lula Institute, the NGO that he heads, received “undue benefits” worth 30m reais ($8m) in 2011-14 from builders embroiled in the Petrobras scandal.

Lula was “one of the principal beneficiaries of the crimes” committed at the oil company, prosecutors claim. He vehemently denies any wrongdoing.

Lula last year came to Rome to give a lecture in at the FAO's June Conference at the invitation of his former protegée. The trip by Lula to Rome was paid for by the FAO