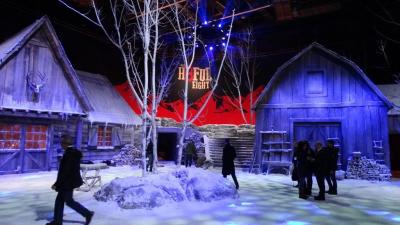 ROME -- Over 10,000 people have been to watch ‘The Hateful Eight’ in the first 10 days of its screening at Rome Cinecittà’s famous ‘Theatre 5’, gaining them 160,000 euros in ticket sales, and making ‘Theatre 5’ the cinema with the largest turnout for Quentin Tarantino’s new film.

2,000 of these attendees were recorded on the same day, last Sunday, February 7.  The screenings that gained particular success were the matinees, with more than 600 people attending the shows at 10.30 on Saturday and Sunday.

The Italian preview took place on Jan 28, at which Quentin Tarantino, the actors Kurt Russell and Michael Madsen, and the great Ennio Morricone were all present.  The event took place in Cinecittà’s historic ‘Theatre 5’ in Rome, as the only location that can project the original version on 70mm film rolls for the duration of 187 minutes.

Screenings will be taking place in Theatre 5 every day until February 28, at both 4pm, in the original language with Italian subtitles, and at 8pm, dubbed into Italian, as part of Cinecittà’s Winter Film Show.  This also includes viewings dedicated to the major works of Sergio Leone, which will take place in the Federico Fellini room, where it’s possible to revisit some of his greatest films in Cinemascope 6.