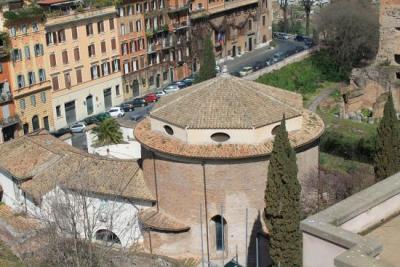 ROME -- The housing scandal continues, with the new discovery of a free house for Rome’s city policemen which can be found in one of the most beautiful streets in Rome, where the road sweeps down from the Palatine hill and winds round to the Forum and Circus Maximus, at number 70 on via di San Teodoro.

Whilst the prosecution goes ahead with the tax verification of the tenants, in the face of the outrageous rent of properties owned by the Capital, it is the Italian finance police who make the first move.  Under an act from Lazio’s Audit Court, the military core of the tax police have acquired the acts relating to the house on via di San Teodoro, behind the headquarters of the General Command of the Roman Capital Police.

The building is occupied for the most part by various groups of police, such as ANVU (The Local Italian Police Association), ARVUC (The Roman Association of City Police in Retirement) and International Police. The most interesting is ARVUC, the association of former police officers.  The premises on Via di San Teodoro, given without a cent of rent, were assigned to the club of ex-policemen in 2006.  The officers obtained four rooms within the complex, on a temporary basis however, for the surveillance of the building, which was almost derelict.

The association was not even called upon to pay for the utilities, though over the years the leaders had put forward a number of requests to settle the bill, addressed to the City Heritage Management who had leased them the building.  The club asked several times, in fact, to regulate their position and obtain a normal lease.  They never received a response.

Now it is up to the Audit Court to investigate, with the prosecutor Guido Patti asking the Finance Police to clarify.  All contracts for the building, since 2010, have been obtained and will be examined, along with documentation of the costs paid by the association.

Insights into this case of municipal leases granted at very low rates run on two tracks however.  On one side there are the financial police who, along with the investigators from Via Baiamonti, have opened around 50 case files, and on the other we find the Prosecutor's office who have launched three different inquiries into the case, relying on the Public Ministers Alberto Galanti, Corrado Fasanelli and Giorgio Orano.

Now, after the release of the dossier by Special Commissioner Francesco Paolo Tronca, the findings are sure to accelerate.

There are two hypothetical charges.  The first is the abuse of position of office of those responsible for real estate assets, and fraud.  The second could be brought against the beneficiaries of the privileged treatment, if it emerges that the subsidised housing was given to people who declared a phony income and, perhaps with the help of corrupt officials, have managed to secure a low price, whilst maintaining a normal bank account.