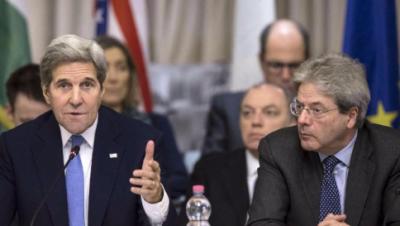 ROME -- "We will crush ISIS from every direction," were US Secretary of State John Kerry's words at the anti-ISIS coalition meeting in Rome on Tuesday. "I have asked other countries in the coalition for renewed contributions [to the fight against ISIS] according to what each country can do, from raids to logistics to intelligence. I expect that when we meet in Monaco for the conference on security each country will be clear on what type of contribution it will be able to give."

Kerry's strong line comes after increasing US pressure on Italy to step up its military commitment against ISIS. At a meeting between Kerry and Italian foreign minister Paolo Gentiloni, the former thanked Italy for it's "substantial" contribution to the anti-ISIS coalition and "in particular for its leadership role in Libya in the process of forming the government."

Referring to Iraq, he said that "Italy has been one of the lead countries with respect to the training. The expertise of the carabinieri that they have brought to bear in training police in Anbar, in Nineveh, in Salah ad Din, has made a huge difference."

In December 2015 the US pushed for an Italian deal on the Mosul Dam, recently recaptured from ISIS control. Italy's Trevi group, a company specialising in foundations for ground stabilisation, won a commission worth two billion dollars to repair and maintain the dam, which fell under ISIS control in August 2014 but was liberated by Iraqi Kurdistan's Peshmerga forces some days later with help from international coalition air raids. The area is still one of the Caliphate's strongholds.

Italian prime minister Matteo Renzi said that "we are in Iraq for training but also for the important operation at Mosul dam, in the heart of a very dangerous area on the border with the Islamic State, which is seriously damaged and if it fell would destroy Baghdad. The contract was won by an Italian company, and alongside the Americans we will be sending in 450 of our men to repair it."

The piece of infrastructure is vital to Iraq, and will be guarded by both Italian and American troops to protect it from possible terrorist attacks or from falling back into the hands of ISIS.

The relationship between the Trevi group and Iraq goes back to 2008, when Drillmec, a section of the group, signed an accord with Iraqi Drilling Company to provide six drilling installations, coming to a value of over 100 million dollars. In 2011 Trevi's Cesena society came close to signing a contract for the Mosul dam, which then fell through. Trevi commented that "a definitive and legally valid contract on the part of the competent Iraqi government has not yet been organised," but said that the negotiation process was "ongoing." 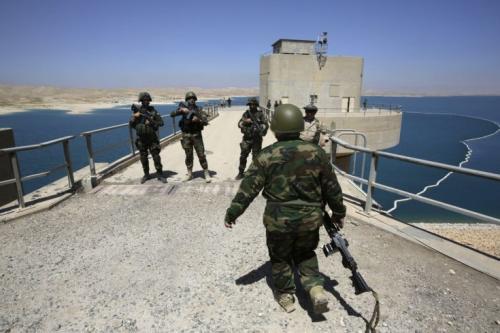