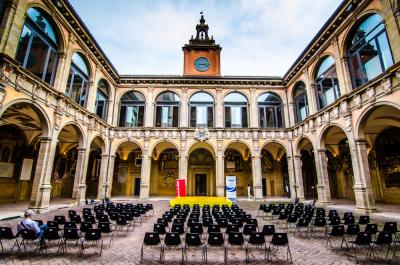 Bologna university, the oldest in Italy, just misses a place in the world's top 200

ROME - Lack of resources, tumbling prestige and rampant corruption are problems faced not just by Italian politics but also Italian universities, which have seen a 20 percent decrease in the number of students enrolled.

Lack of graduates opportunities, cuts in funding and a rise in taxes all take their share of the blame for a 65,000 decrease in students enrolled at university in the last decade, whilst the numbers of teachers, technical and administrative have fallen by over 12 percent, and study courses have dropped from 5634 to 4628.

All this in addition to a 22.5 percent drop in student funding. Italy's university system now finds itself at the bottom of the pile in Europe second only to Greece. This represents a frightening prospect not only for students but also for the economy, which without a qualified workforce will surely lose competitiveness and credibility.

Employment opportunities continue to fall, with little over a half of students finding work within three years of graduating. This is lower even than Turkey, and compares

Cuts in university funding have also aggravated Italy 's north-south divide, and led to a stalling of social mobility.

The recession has for many families made sending children to university impossible.

And the depression has especially affected young people from low-income

families. Those living in the more affluent north are more likely to be paid the scholarships to which all students have the right whilst those in the southern regions tend to lose out.

The decline in financial resources evidently has increased the spread of corruption within the Italian university system, with its deeply entrenched culture of nepotism. A 2014 study published by the scientific journal Plos One confirmed nepotism to be one of the most widespread problems within the country's academic circles, and at its worst for those in engineering, law or medicine.

Hope for Italy's universities has not been entirely lost, however, with the Milan Polytechnic still listed within the world's top 200 universities in international rankings, and Bologna University coming 204th.

Their gradual decline will, on the other hand, continue to undermine economic growth. Ivanhoe Lo Bello, vice-president of the General Confederation of Italian Industry, said that "the competitive capacity of a country is measured according to its universities. If we continue to lose human capital we risk absolute desertion. Losing 65,000 students in ten years is worrying sign, especially in the South. We have discouraged young people who do not have the resources to support themselves in their studies."

The future of Italy will depend on what is done now to reform its education system.