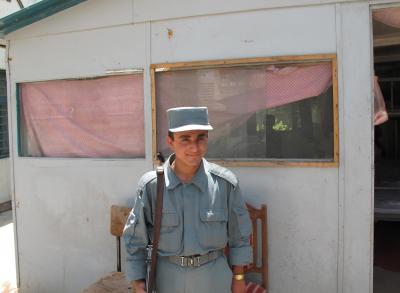 KABUL  --  ‘’Security companies are there, first and foremost, to prevent any shooting from taking place, not to engage in it,’’ I was told by a South-American-born former MSF logistician who has recently switched to working for a security company in the Afghan capital.

Not everyone would agree. Afghan president Hamid Karzai, for example, announced in August that all private security companies working in the country would be banned by December 17, notoriously calling them ‘’thieves during the day and terrorists at night’’.  He then commented during the Tajik president’s recent visit to the country on October 25 that ‘’we don’t yet know how many of  these blasts are by Taliban and how many are carried out by them’’, referring to private security companies. A slight backtracking was seen two days later, on October 27, when he announced that a committee would be set up to grant a maximum 90-day reprieve where warranted: however, as things stand most of the Afghan and international companies registered in the country and providing protection for development projects will soon be booted out or dismantled, with Afghan police and army to be tasked with guarding the latter.

US and NATO officials have been trying to secure special agreements for some projects and activities to be allowed to continue using private security firms. However, so far only those at diplomatic offices or employed by the military will be allowed to stay on.

Over recent years private security companies have become synonymous with mercenaries acting with impunity, especially following the 17 September 2007incident in Baghdad’s Nisour Squarein which Blackwater employees opened fire on civilians, killing 17. Blackwater later changed its name to Xe Services and held on to lucrative CIA and State Department contracts, and continued to do so even after disquieting reports on a wide range of atrocities committed by those working for the company. On October 1 Obama renewed Xe Services’ contract in Afghanistanfor another 5 years, while President Hamid Karzai’s riposte the following day was to announce a ban on it and seven other foreign private contractors from working in the country in a bid to stem popular discontent.

Within the specifically Afghan context, security companies have long been accused of funding the Taliban by paying off them to cross certain areas, of shooting at civilians indiscriminately and of guarding routes to exact heavy ‘’tolls’’ themselves. But they have also been the ones to ensure that road and school building, well digging and supplies deliveries are carried out – and a number of aid and development projects will be forced to pull out of the country if the measure goes through. For example, a spokesman for USAID-supported Development Alternatives Inc. has been quoted as saying the group was planning to shut down its Local Governance and Community Development Project, which employs more than 800 Afghans in over 20 of Afghanistan’s 34 provinces.

How exactly the Afghan National Army (ANA) and Afghan National Police (ANP) are to handle tasks such as ensuring safe passage for fuel convoys, protecting infrastructure and so forth remains to be seen, with their current task of providing basic security a distant dream in many areas despite improvement in recent years.  Illiteracy rates are around 80% within their ranks, in a population with estimated overall literacy of around 35%, and with very few young men willing to sign up (monthly salaries run to around USD 250, roughly what the Taliban are rumoured to pay their fighters) the chances are slim that there will be sufficient numbers at all, much less an adequate level of preparation of those thus employed.

The idea has been suggested that the Afghan men currently employed by security companies will, if sufficiently disciplined, simply be able to join the army instead. The opposite could very well occur as well – that is, they could very well opt to join the other side, or form their own groups. A situation seeing large numbers of young men used to being armed and suddenly unemployed has had grave consequences in many parts of the world before.

The vision of vast amounts of money to be made in foreign private security firms is legendary, but depends a great deal on the position and nationality of the employees and the company itself. However, in the logistician’s case, working at a desk job in the private security firm he receives USD 400 per day with a month’s unpaid leave every three, compared with an MSF salary of about USD 2,000 per month and a week off every three months. He also is under fewer restrictions as to where he can go and who with (MSF staff are prohibited from associating with UN staff, among others, due to neutrality regulations).

ProPublica recently ran an article on deaths and injuries among civilians working under US contracts, showing that the latter had exceeded military ones for the first time in the period from January to June 2010.  The site has a map of injuries and deaths to civilian contractors in Iraq and Afghanistan with a caption which includes the following: ‘’outside of the United States, which has some 18,000 contractors injured or killed in Iraq and Afghanistan, India has the most with 381 contractors injured or killed’’.  Indians’ presence in the country, however, is intentionally kept low key,  mostly due to friction between Indiaand Pakistanand possible repercussions, especially after the attack on the Indian embassy in Kabulin 2008.

Little publicity was also given to the fact that Nepalese Gurkha from the private security company IDG Security were the ones to shoot the burqa-clan suicide bombers before they detonated themselves in the close call – in terms of lives and the political damage such deaths would have caused at the international level – during the October 23 attack on the UN headquarters in Herat, when I was in the city, and in which three of the Gurkhas suffered injuries.

After working for MSF for extended periods in Guatemala, Ethiopia, Nigeria, Madagascarand other countries, the logistician feels he has made the right choice even at the ethical level. Long fed up with the close-mindedness of so much of the NGO world and the self-righteousness that oftentimes accompanies it, he had grown tired of trying to push aside nagging doubts over the ‘’neutrality’’ which is the MSF creed in all war zones. To his mind, ‘’we are, in essence, helping the Taliban. Those who come into the hospitals, who get access, who manage to even make it out to where we are and are not afraid to do so, are those in some way connected with them. I mean, in the end that’s what we’re doing: helping the Taliban. Of course we claim to help everyone, but if we are working in a war zone controlled by them, they’re the ones benefiting the most. And I was tired of it. I have no desire to help those I consider my enemies at a personal level.’’ The project that he’s now working on involves providing security for development projects in eight Afghan provinces, and with the money he’s making he plans to continue his education abroad.