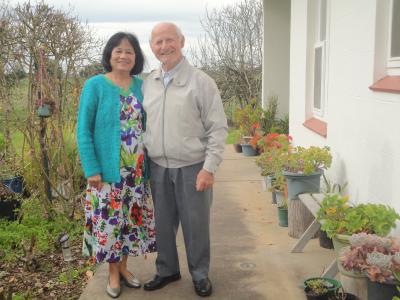 Giovanni and his current wife Pina

MOUNT GAMBIER, Australia -- AFTER 55 years in Australia, my father Giovanni Prosperi-Porta has no desire to return to his home country, Italy. “Ï haven’t thought of going back, I don’t feel like going back and most people I knew who are my age have passed away,” Giovanni, 74, said.
“I’ve had a really good time and I’ve really enjoyed it here in Australia, it’s a wonderful country.”Giovanni emigrated to Australia in 1956 after the 2ndWorld War when he was 20, following in the footsteps of thousands of other Italians seeking a better life abroad. He grew up in Carpineto Romano, about 60km (40 miles) south-east of Rome.
“After the war it was very hard, there was not much work around and very hard for living, especially if you were on the land,” Giovanni said.
There are 22,500 Italians in South Australia, according to the Australian Bureau of Statistics. Over half –- 12, 450, are aged over 65.
The number of older Italians in South Australia is growing at twice the rate of other communities, and faster than other groups who came to Australia after WW2, according to the South Australian Italian advocacy group - Comitato Assistenza Agli Italiani (COASIT).
The COASIT’s President,Gianna Vorassi, said that with such a large population, Italians are widely accepted and valued in the Australian community.
“I think as the Italian population grew in the 60s and 70s, Australians began to see the positive traits of Italians,” Ms Vorassi said. “They brought a different culture – their fashion, and food, which Australians appreciated.”
ForGiovanni, racism was never a problem. “Some people did experience a bit of racism now and then and were called names in the early days, but I really had no problem,” he said. “I got on pretty well with Australians wherever I went – I liked them and they liked me.”
With only five years’ education and unable to speak English, Giovanni relied on his brother Raffaele, when he arrived in Australia. Raffaele emigrated to Australia in 1953, working in different parts of the country before settling in a small country town called Mount Gambier, in the south east of South Australia.
Giovanni lived with Raffaele and gained employment at the cheese factory where Raffaele worked in Yahl, near Mount Gambier.
“It was hard at work to begin with because I couldn’t understand the language,” Giovanni said.
“But there were two or three Italians working there too - sometimes if the boss wanted to tell me something the boss told them and they explained to me if I didn’t understand.”
Giovanni picked up basic English by listening to his colleagues and undertook English classes at a migrant school in Mount Gambier. Within 12 months, he could speak English fluently.
“I learned pretty quick and when I started to understand, I started to like Australia more and enjoy it,” Giovanni said.
Life was much easier for Giovanni in Australia, where he worked seven days a week so he could make as much money as possible.
“In Italy I was working on a farm for mum and dad -- we didn’t get paid because they couldn’t afford it. But here you could work and get good pay,” Giovanni said.
“It was much better than the place I used to come from. In Australia you had more opportunities - if you were prepared to work hard you could earn more money.”
Giovanni also worked picking fruit and making concrete pipes in a factory, before marrying his wife Maria in 1969, with whom he had seven children.
His passion for farming never waned and Giovanni bought a pig and dairy farm near Mount Gambier, leaving his job at the concrete factory.
“I was brought up on a farm and always loved the farm, that’s why I went back to the farm,” Giovanni said.
Since leaving Italy, Giovanni has visited only once - with Maria (now divorced) in 1978.
“Things had improved – there were more jobs and the standard of living was much better than when I was there,” Giovanni said.
“But it was different and I wasn’t used to it anymore.  I wouldn’t like to live back there, I think it’s much better here.”
While Giovanni has dozens of relatives left in Lazio, he doesn’t plan on returning.
“In one sense I miss them, but in another I don’t because they’ve got their own way of life and I’ve got mine,” Giovanni said.             “I’m used to this culture of course but I still haven’t completely forgotten the culture where I came from. But I wouldn’t leave this for that one.”