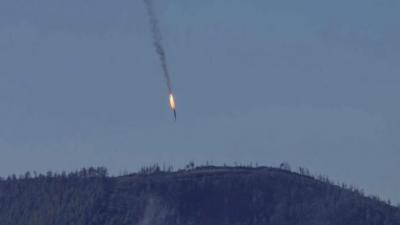 The Russian jet crashing after being hit by a Turkish missile

ROME - This week’s downing of a Russian jet by Turkey near the Syrian border will complicate even more the mess surrounding Syria.

Putin has called Turkey an “accomplice of terrorists”, and has denounced that the oil extracted by the Islamic State (ISIS), which is vital for its finances, is sold through Turkey, This was an open secret, as it is an open secret that Saudi Arabia and Qatar are in fact financing Sunni terrorism.

Meanwhile, France is pushing for military support from European partners. British Prime Minister David Cameron has promised support, and has announced a 16.8 billion pound increase in Britain’s defence budget, while at the same time cutting public spending costs, including for education and health.

It is interesting to note that in the world’s various stock exchanges, beginning with the City in London, the value of the shares in the military industry are on the rise.

The ISIS imbroglio is increasing military spending. Saudi Arabia has just bought 1.75 billion dollars’ worth of missiles from the United States, ostensibly to fight Houthi rebels in Yemen who, because they are Shiite, are automatically enemies and held to be part of Iran’s play for power. Considering that the Houthi do not even have a helicopter, this is an intriguing deal.

However, all Saudi military spending is matched by Iran, with all the other Gulf countries following, and everybody else in the region trying to catch up. The only country which has not increased military spending is Tunisia, which is the only positive outcome of the Arab Spring, and yet nobody is really investing to strengthen its fragile democracy … a clear demonstration that money is always available for war, but scarce for peace.

Worldwide, military expenditure last year amounted to 1.7 trillion dollars. The United States, the biggest spender, had a defence budget of 711 billion dollars, followed by China with 143 billion, an increase of 170 percent since 2002. Russia has seen a rise of 53 percent since 2014, and is now at 72 billion dollars, overtaking Britain (62.7 billion) and France (62.5 billion). But the increase in the British budget, also to be followed by France, will means another increase in the Russian budget, as President Vladimir Putin has already announced.

To defence budgets we must now add the cost of anti-terrorism.  The Institute for Economics and Peace (IEP) has estimated the direct costs of anti-terrorism in 2014 were almost 53 billion euros. Direct costs include the loss of human lives and damage to property. Of course, during 2015 this will climb and more so in 2016. If we add indirect costs to those direct costs, the figure will climb exponentially. What is the cost of the loss in tourism, the decline of clients in restaurants and at concerts and other public events? The estimates of pilgrims for the Extraordinary Jubilee called by Pope Francis have gone down from 30 to 20 million. In St. Peter’s Square, despite very heavy security, there has been a drop of 50 percent in the number of faithful who gather to listen to the Pope during his weekly address.

This is, in fact, an undisputed victory for Bin Laden and the ever-increasing sequence of terrorism after him. The West has been obliged to incur considerable expenses and has undergone a dramatic change of lifestyle. It is worth recalling that when he was Let us not forget that when he was president of the United States, George Bush senior announced in 1991 during the war against Iraq to punish Saddam Hussein for his invasion of Kuwait that the “American lifestyle is not negotiable”.  Fear is now fueling xenophobia … to admit 10,000 Syrian refugees would be a threat to the United States, according to the U.S. Congress.

But are we sure that military security is the right response to terrorism? Conventional wars are over. The Islamic States’ 50,000 fighters would not last a month against a regular army. But the Syrian conflict is in fact a proxy conflict, played out by several countries, with the Syrians reduced to just a tool. And the Paris massacre was perpetrated not by Syrians, but by Europeans of second and third generation Arab descent whose social profile is clear – youth marginalised by society who felt humiliated by lack of dignity and employment, isolated in their ghetto. None of them were practising believers, quite the contrary. Yet they found in terrorism their redemption and dignity and revenge against a society that they felt was excluding them. And it is not a fighter jet that will defeat the European terrorists. It may well be that a fighter jet could be useful against ISIS (once all  the players – Russia, United States, France and Europe, Saudi Arabia, Qatar, Turkey, Iran, the Kurds, Hezbollah, etc. – reach a political agreement) but the bulk of the increase in defence budgets is going to advanced weapons, which have no relationship with security against terrorism.

It is also time to accept that European citizens will not feel more secure by knowing that their military forces have one more fighter jet. Neither will Saudi Arabia citizens knowing that they will have 220 missile stations.

Both in Europe and Saudi Arabia, markedly different realities, there are similar social problems – high youth unemployment, striking social inequalities and a decline in public spending. Saudi Arabian leaders are accustomed to buying the people, but their financial reserves have been shrinking since the fall in oil prices. The International Monetary Fund (IMF) has warned them that if they continue to pile up deficit at the present level, in 10 years’ time they will be scraping the bottom of the barrel. Meanwhile, the United States is in a phase of recovery, but 14.5 percent of its population is officially in poverty … so nobody escapes the problem of human security…

What would make people feel secure? Well, besides military security, to have their personal security realised. That means have access to good education and health care, equal access to a decent job, a clear pathway to a dignified old age. It is obvious to everybody, and reiterated by the sociologists and anti-terrorist specialists who analysed the profiles of those responsible for the Paris massacre, that if they had had access to that kind of human security, they would have not enrolled in terrorism.

As a Senegalese teenager declared to French TV 5, showing some marks on his body, ”I was beaten by the police, not by terrorists. And for us, here in this ghetto, either we go into trafficking or other petty crimes, or we have no way to live, because we cannot find a job”.

Yet France is going to increase military security, not human security. European countries are cutting budgets for international cooperation. The Nordic countries are diverting funds intended for poor countries to attend to refugees. The Euro-African summit held in Malta on Nov. 11 to provide African countries with more resources to avoid their citizens emigrating to Europe came up with a paltry 1.9 billion euros for a whole continent, while Turkey got 3 billion for the refugees in its territory. Turkey is much closer to Europe…

While nobody would disagree that a real definition of security would see it with two prongs, one military and one human, there is a dramatic lack of coherence. If the world were to earmark just 10 percent of military costs to human security, it would mean a staggering amount of 170 billion dollars – enough to meet the ambitious Sustainable Development Goals established in September at the United Nations by all the world’s heads of state to solve all social problems. But the gap between rhetoric and reality is one of the main causes of the decline of legitimacy of political institutions.

So, it is evident that by directing 10 percent of military to human security and 90 percent to military security, we can reasonably  assume that others terrorists will appear in  Europe, under direction from abroad. The fact is that there are many more interests in military expenses than there are in poverty and injustice.

It is safe to assume that we will continue to increase military costs, to have an ever-increasing expansion of security with serious limitations to privacy and dignity. The world is entering a period where fear is going to become the daily feeling for many citizens. We are going backwards in terms of civilisation.

A cynical stereotype endorsed by some historians says that changes in the world have been always caused by greed or by fear. It is evident that we were in a period of greed. It is greed that has been a factor in forgetting values like solidarity and justice. If somebody steals a chicken, the judge is obliged to give a sentence, suspended but still a sentence. The chairman of Volkswagen, who defrauded millions of people and contributed heavily to pollution, goes into retirement with nearly 50 million euros. How many chickens can you buy with 50 million euros?

And then some are surprised if some marginalised young people look at the world as corrupt, that must be saved by self-sacrifice for a better and pure world? .

For the first time in a long time, it is security not the economy that is at the centre of the debate. Does that means that we are going from a cycle of greed to a cycle of fear? Is that progress?

History can give a different reading: civilisation has advanced not by confrontation, but by cooperation; not by war, but by peace; not by aggression but by tolerance; not by selfishness but by solidarity … and not by military security but by human security.

*  Roberto Savio is founder and president emeritus of the Inter Press Service (IPS) news agency and publisher of Other News.