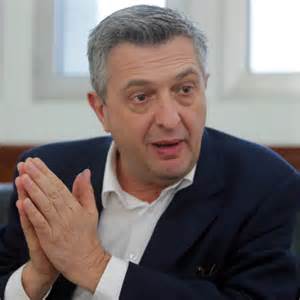 Filippo Grandi, the next UN high commissioner for refugees

ROME - This month the general assembly of the United Nations endorsed the nomination of long-serving Italian diplomat Filippo Grandi as the next UN high commissioner for refugees. He replaces former Portuguese Prime Minister Antonio Guterres on 1 January.

Born in Milan in 1957, Grandi has spent most of his career in the UN, working for the UNHCR in Sudan, Syria, Turkey and Iraq among other places and leading the UN agency for Palestinian refugees (UNRWA) from 2010 until 2014.

His nomination not only continues the proud tradition of Italians in key international positions – Romano Prodi as president of the European Commission from 1999 to 2004, Mario Draghi as current president of the European Central Bank and Federica Mogherini as the European Union’s current high representative for foreign affairs – but it can also be seen as recognition of the front-line role played by Italy in Europe’s worst refugee crisis since the second world war.

Last month UNHCR said it expected 1.4 million refugees to arrive in Europe in 2015 and 2016 in search of “safety and international protection” from terrorism, war and persecution in their home countries. The vast majority are Muslim.

Grandi now has the challenge of ensuring that these people are not turned into scapegoats as western countries ratchet up the ‘war on terror’ following the 13 November attacks by Islamic jihadists in Paris in which at least 129 people were killed.

The day after the tragedy Poland’s future minister for European affairs said it would be “impossible” for the new conservative government to accept previously agreed EU-mandate quotas for refugees amid subsequently confirmed reports that one of the Paris terrorists had transited through Greece in October. The others were all allegedly French or Belgian nationals.

Similar sentiments have been expressed in Italy by Matteo Salvini, leader of the anti-immigration and anti-Europe Northern League, and he is not alone.

However, as the speaker of Italy’s Chamber of Deputies and former UNHCR Italy spokesperson Laura Boldrini pointed out, refugees are often “the first victims of terror”.

“Those who want to send them back are giving Islamic State a gift by allowing it to step forward as their only protection,” she said in an interview to L’Espresso magazine published 18 November.

“Those who say all Muslims are the same make a few thousand militiamen representative of billions of people. It’s madness,” she added.