How Much is Left of Syrian in the Syrian War? 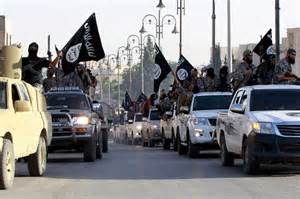 ISIS is not the bloodies terror organisation

ROME - The U.S. Congress, under the valiant leadership of Republicans, has vetoed the entry of Syrian refugees, including women and children, into the United States against Obama's intention to accept 10,000 – a symbolic amount in a country which accepts over 50.000 refugees every year – while Germany is accepting at least 800,000 Syrians.

What is frightening is the total ignorance of the world which is behind that veto.

According to the New York Times, more than 30 percent of U.S. senators have never possessed a passport and the U.S. Senate – the shining chapel of the exceptional destiny of the United States (the only real democracy, as Georges W. Bush once famously declared) – is an excellent example of the exceptionalism of U.S. democracy.

By constitution, every one of the 50 States of the Union has two member of the Senate: from Wyoming, with just over 563,000 inhabitants, to California, with more than 37 million. Under the same constitution, the President of the United States is elected not by a citizens’ vote but by a vote linked to the same states. This very peculiar democracy probably insulates the senators even more through the inevitable localism of a great country, blessed with all kind of natural resources, and whose presidents are the only ones that speak on behalf of United States and humankind.

But if the Republican elite could have read even just at a little bit about the Islamic State-ISIS and Syria, this would probably have avoided a vastly uninformed and callous action, taken in total ignorance of the Syrian drama, with over 100,000 dead, four million refugees, and the destruction of a country blessed with rare monuments and a large, educated middle class.

On the Syrian war, they would have learned that there is little left of Syrian in the conflict if they had just read the newspapers. Allies of the United States – Saudi Arabia and Qatar – are, in fact, supporting ISIS, financially and with weapons. This is well known in Washington.

U.S. Vice-President Joe Biden put things clearly in public remarks in October 2014, when he said: “Our allies in the region … were so determined to take down Assad and essentially have a proxy Sunni-Shia war, what did they do? They poured hundreds of millions of dollars and tens of thousands of tons of weapons into anyone who would fight against Assad, except that the people who were being supplied were al-Nusra and al-Qaeda and the extremist elements of jihadists who were coming from other parts of the world.”

In Washington it is also clear that in this conflict the allies of the United States are Iran, Hezbollah and the Kurds, who are its declared enemies. And now, President Barack Obama is making an alliance with Putin, who is the subject of U.S. and European sanctions, following events in Crimea and Ukraine.

Similarly, ISIS has everybody as an enemy, but nobody is really fighting it. ISIS is not an enemy of Assad and Russia, which are engaged in fighting the rebel groups (among whom we can find a few non-religious Syrian rebels). In fact, Assad has been using ISIS and other fundamentalist groups to show the West that it is better to keep him in power.

ISIS is not the enemy of Turkey, which supports the Syrian branch of al-Qaeda (Jabhat al-Nusra) and has given support to ISIS fighters, as Columbia University has shown in a long list of the relations between Turkey and ISIS. Turkey is essentially fighting the Kurds, who are the main force fighting ISIS.

ISIS is not, of course, the enemy of Saudi Arabia, which shares the same view of Islam. Neither is ISIS an enemy either of Iranians, who are Shiite, and look to the conflict between radical and moderate Sunnis as an internal issue. They intervene only to defend Iraq, which is also one of the few Shiite countries, because the vast majority of Islam is Sunni. ISIS is not even an enemy of Israel, which looks to the Syrian conflict as something that splits the Arabs and relegates the Palestine issue to a lower level.

This is why, besides the inefficient bombing from France and the United States, and now partly from Russia (whose priority has been to bomb the rebels fighting Assad), there is no real threat for ISIS.

The Syrian war is no longer a war made by Syrians. It is a war in which many foreign powers are ready to fight to the last Syrian. And now along comes the U.S. Congress which equates being Syrian with being a terrorist, while the Syrian people are actually the victims of everyone!

We now know that the Paris massacre of Nov. 13 was organised entirely by Europeans, with no Arab coming from Syria … and that the Syrian passport found near a kamikaze was a fake intended to increase the rejection of refugees by Europeans. It is no coincidence that the insulated Republican senators have taken the bait, while Europeans have not.

And, when debating ISIS, the U.S. senator should reflect on the fact that of the Western countries, their country is by large the most responsible for this mess. We all know that al-Qaeda was created by Bin Laden and other mujahideen, financed by the United States to fight against Russia in Afghanistan.

We all know that the U.S. intervention in Iraq – to eliminate arms of mass destruction which did not exist – created a vacuum of power and institutions, because U.S. administrator Paul Bremer disbanded the army and fired any member of the governing Ba’ath party from the administration in order to eliminate any legacy of Saddam Hussein. Given that being a member of the Ba’ath party was indispensable for making a career, this meant the elimination of all competent bureaucrats. We know now that the organisers of ISIS are former Iraqi army officials.

Well known is the impact on Iraqi public opinion of the fact that torture was widely used during the U.S. occupation, and the horror of Abu Ghraib, the Iraqi prison where prisoners were tortured, sexually denigrated and photographed by U.S. soldiers.

The U.S. senators should know, because they voted for limitations of human rights and individual freedom with the adoption of the Patriot Act, which is now opposed by the large majority of Americans. At that time, they were engaged in an “infinite war against evil”, as President Bush declared, where U.S. troops were to have intervened in several “rogue countries” until reality dawned and the United States is now very hesitant to put troops on the ground, even against ISIS, despite a positive resolution from the United Nations which the United Stets lacked when it intervened in Iraq.

What U.S. senators should also consider is that ISIS is not the bloodiest terrorist organisation. It has killed less people than Boko Haram in Nigeria. Of course, there the victims are black, so not of concern for the West.

They should consider that of the 750 victims of ISIS outside Iraq and Syria, less than 30 percent are Europeans, and that the main objective of ISIS is to enlarge the Caliphate, and is attacking the West only to elicit its radicalization, and increase discrimination against the 44 million Muslim living in Europe, and provoke military interventions in order to convince more Sunnis to join its fight.

ISIS is winning that battle. Just think that Europeans are going to lose freedom of movement inside Europe, because the Schengen Agreement which created borderless Europe is going to be cancelled. Airports have already become places of unprecedented aggravation. Daily life for every citizen is never going to be as before.

European right-wing and xenophobic parties (which look to U.S. Republicans as their American counterpart and, curiously, Russian President Vladimir Putin as a like-minded soul) are all going to increase their strength in parliaments and governments in the forthcoming national elections. The European dream is now definitely in retreat.

The real problem is that even if somebody gets serious about ISIS and destroys its small army of 50,000 fighters, the problems are not over. What it will not be possible to destroy is the fatal attraction of a radical Islam for unemployed and frustrated young Arabs who took part in the Arab Spring, but also those in the ghettoes of Europe. Its dream is of a pure and incorrupt caliphate, which is going to eliminate dictators, kings and sultans to redistribute wealth among all Arabs, take revenge for humiliation and islamophobia, and provide a strong and dignified identity for its citizens.

But how can we expect any in-depth contemporary knowledge from a Republican Congress, when their presidential candidates have shown a lamentable ignorance of the world in which they live?

Just think of Ben Carlson, a leading candidate, who has said on TV that Chinese troops are involved in Syria … and of Donald Trump who has said that all Syrians out of Syria want to export terrorism!

The sad fact is that the West is now in a no-win situation. It is not possible to let the caliphate expand and continue its work of radicalisation. But once the caliphate is gone, the radical Salafists will regroup again, with the support of Saudi Arabia and Qatar. They can take one of two directions: that of al-Qaeda, which is to fight against apostate Muslims who do not support its cause and infidel Americans and Europeans who support the Arab regimes, in order to be able one day one to establish a caliphate; or that of ISIS, which is to take over a piece of land, establish a caliphate and expand from there.

Those two souls of jihadism are already fighting each other in Syria. But whatever happens, it is very probable that the West will again fail to intervene immediately, and deal with the Arabs by making many mistakes, once again playing into the hands of the terrorists.