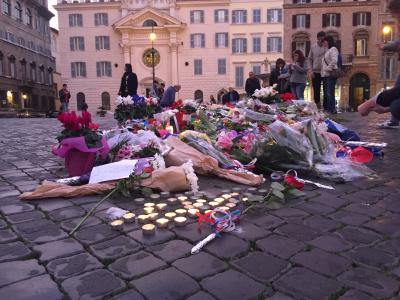 Photo from the embassy vigil on Monday

ROME - On Saturday, the day after scores were killed in terrorist attacks in Paris, Beirut and Baghdad, Lindsey Unger heard a memorial had sprung up in front of the French embassy in Piazza Farnese.

That evening, the 21-year-old American university student bought flowers at the nearby Campo de Fiori – carnations, she said, symbolising affection and friendliness – and laid them in a steadily-growing pile.

Unger said the atmosphere was somewhere between heavy and jovial, as people who had gone to the piazza for the memorial mingled with tourists who stumbled upon it. After a few minutes, a few children arrived, asking their parents “all sorts of questions,” she said. The existing tension seemed to break.

“It helped people breathe,” she said.

Unger needed it – she said she herself had family members in Paris, all of whom were alright but who had been difficult to reach at first. She joined hundreds of Rome residents who visited the vigil at the embassy or who went to a demonstration at Piazza del Popolo on Saturday night.

As the weekend ended, memorials continued to crop up in Rome and around the world, as did discussions. A Europe-wide moment of silence was held at noon on Monday, including at the school Unger attends, John Cabot University. That afternoon, students there packed a classroom for a weekly discussion of politics. The topic had quickly been changed to the weekend’s events.

Michael Driessen, an assistant professor of political science at the American-style school with a large study-abroad population, moderated. He explored the historical context of the Paris attacks, pointing out a connection between the France’s colonial past and the nationality of some of the attackers. He said French president Francois Hollande’s language of war meant NATO would get involved, and that nations might be swayed to tighten the flow of migrants.

“This could be a crucial moment in the immigration issue,” he said.

Then the flood of questions came, asked by students with a variety of nationalities and backgrounds: why are we focusing on Paris but not the similar attacks in Beirut and Baghdad? What will become of the Muslim community? In what context do we put Il Libero’s “Bastardi Islamici”? An argument over the changing of one’s Facebook profile picture to the French tricolor almost became heated.

From the outset, Driessen encouraged a measured response.

“I urge you not to make this a clash-of-civilizations debate,” he said.

On Monday night, flowers still bisected Piazza Farnese, interspersed with drawings and messages of sympathy or hope. A steady trickle of people speaking Italian or other languages laid down flowers or mementos, took photos or just knelt for a moment, in memoriam.