After Marino, Rome is craving a democratic bulimia 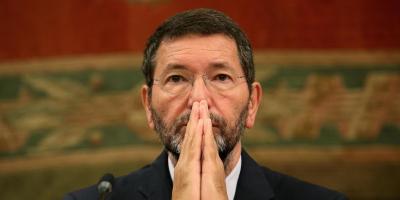 There was a clash between Marino's and Renzi's characters.

ROME - Ignazio Marino’s sequence of scandals, followed by the quitting of 19 of his councillors, then the arrival of Francesco Paolo Tronca as new Rome Commissioner, only reflects a lack of democratic principles within the Italian political system rather than the ineptitude of the flamboyant ‘former’ mayor of Rome.

It’s been almost a month since the beginning of Ignazio Marino’s mushrooming ‘credit card’ expenses affair.

A month in which Marino has been, first, discredited by the Democratic Party and public opinion, then he officially resigned and later on withdrew his resignation proclaiming his innocence and continuing with his duties, despite losing the support of his own party and Italian Prime Minister Matteo Renzi.

Then, the arrival of former Milan prefect Francesco Paolo Tronca - depicted as ‘the paladin of morality’- to run the Capital, once for all, ratified the end of the, perhaps, most accused mayor of Rome ever. Tronca has been proven to be a skilled technician and many think he will economically manage the Capital with his so-called ‘dream team’ of experts.

It’s undeniable that Marino’s political career is over. His public figure has been stigmatised even more than former mayor of Rome Gianni Alemanno, the one directly involved in the Mafia Capital scandal.

However, taken for granted Marino’s political ineptitude and mismanagement of his staff, why did the Democratic Party ostracise him so fiercely? Why did the head of Rome Democratic Party, Matteo Orfini, as well as Italian Prime Minister Matteo Renzi refuse to talk to him?

The reasons may lie underneath a veil of false promises between Marino and Renzi agreed -and not maintained-, perhaps, at the beginning of Marino’s mandate and followed by a brutal diktat of Matteo Renzi. An internal source, in fact, says that the relation between the former mayor and Renzi was close to zero, at the point that Renzi delegated Matteo Orfini and his staff to deal with Marino. The reason? An evident character mismatch between the two.

Therefore, one can argue that Marino has never been the main problem of Rome but a mere obstacle. His ineptitude was clearly an issue to put to an end but the main objective was a different one. “Renzi always wanted Rome under his direct control and now he got it [..] We are witnessing a dangerous example of bulimia power, in which he removes democratic antibodies” sentenced Marino with a recent post on Facebook.

Indeed what we are facing and what actually Rome has been suffering from for more than a decade, is a deficit of a democratic process, a collective and popular dream with the aim at restoring the Eternal city values and system. We want neither a dictatorship operated from above nor a ‘dream team’ of technicians. Rome is solely craving a collective ‘democratic’ bulimia.