Book Review: The Way of Francis 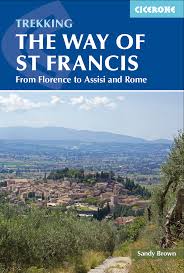 ROME - With the Jubilee imminent, it is a boom season for pilgrimage.  In Rome, pedestrian paths to the four major basilicas will be established as if to confirm that  there is a synergy between sweat and spirituality.

The Way of Francis is a timely trekking guide to a pilgrimage route from Florence through Tuscany, Umbria and Assisi to Rome and its seven pilgrim churches.  It specifies the dimensions, highlights and difficulties of each stage in a trip which covers 550 kilometers in 28 days.   It pays particularly attention to all the places linked to St.Francis, such as Greccio where he made the first nativity crib and Assisi where he began his mission and where he lies.  He came to Rome several times and his memory is preserved at the San Francesco a Ripa church in Trastevere where the cell he occupied can be visited.

The American author, Sandy Brown, is an Methodist minister with a degree in mediaeval history.  The Way of Francis is a detailed, practical guide well-supplied with maps, graphics and photos as well as historical and cultural ‘boxes’.

It is a chunky, pocket- size booklet but it is a pity that the font used is not bigger.

St. Francis’s route to Rome is one of three pilgrim routes which are being refurbished by the Lazio Region for the Jubilee. The other two are that of St.Benedict of Norcia and that of the via Francigena which began in Canterbury and, for pilgrims who wanted to reach the Holy Land, continued south of Rome.

Lazio is refurbishing the Francigena but, of course, only within its border.

Together the pilgrim routes cover 1000 kilometers and usually do not climb higher than 600 metres but, at Sella del Val dell’Organo near Rieti, on Francis’s route it reacheas 1850 metres.   Romans who want to make a mini- pilgrimage can pick up the Francigena near Campagnano Romano, then pass through Formello and La Storta on their way to one of the basilicas.

More detailed information about the route, the historic monuments, the abbeys and churches along the way can be obtained from the site visitlazio.com and on the social sites of Visit Lazio as well as on an App which is being prepared.