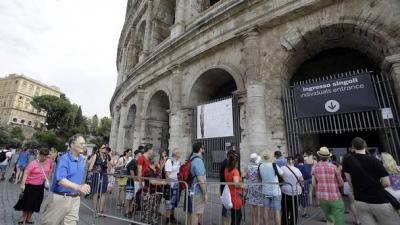 Confusion outside the Colosseum during the union-strike

ROME - Visiting The Colosseum hasn’t been the most pleasant experience for tourists recently. Both the eyesore of the extensive restoration, and the recent union-strike, which kept tourists waiting outside the Colosseum for more than two hours have been more than enough cause for frustration.

The restoration process started in 2014, with the aim of making the Flavian Amphitheatre resemble its former beauty. The project, costing £14 million, will be first full cleaning in the Colosseum’s history. Despite the current ugly sight of the scaffolding surrounding the Colosseum’s southern side, this restoration is a necessity. However, like most things in Italy, it took years of bureaucratic wrangling and a national debate to facilitate.

Nonetheless, Culture Minister, Dario Franceschini faced tremendous backlash for supporting the project. Critics feared that restoring the arena would lead to the Colosseum becoming a type of “Las Vegas”. Instead, he ascertained that the calibre of events to be held at the Colosseum would prevent its cultural descent but acknowledged that there was still “a debate among archaeologists”.

To further inhibit the tourists’ experience of visiting this monument, on Friday September 18, trade unionists held a two and a half hour meeting in the Colosseum. Hundreds of tourists were abandoned, stranded outside. The workers were locked in a dispute with the Culture Ministry over issues such as staff shortages and payment delays. However, this isn’t the first time that the site has closed this year, with the Colosseum and the city of Pompeii closing in July to discuss these same issues.

In response, Italian Prime Minister Matteo Renzi has announced that the Cabinet has approved an emergency decree to limit strike action for those working in museums and cultural heritage sites and prevent similar episodes.

Surely, preserving the tourist’s interest in national monuments should be one of the government’s priorities? However, if the government cannot run the Colosseum better, Renzi evidently needs to consider selling off the grim old pile to the highest bidder.