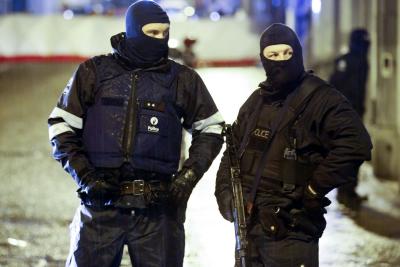 Officers after a counter terrorism raid in Verviers

WOLLONGONG — The counter terror raids by Belgian police in Verviers, Eastern Belgium underscored the seriousness of the home-grown terrorist threat currently facing Europe. Conducted on January 15, this security operation resulted in the death of two suspected Belgian Islamists. These militants had returned from Syria and were planning to attack Belgian police commissariats.

The Verviers incident is an indication that Belgium faces an internal security challenge that has external links. This problem has its roots in shifts in the landscape of global conflict that has progressively imported Islamist terrorism into the country. Belgium has been an ideal recipient of this insecurity because of the identity crisis facing its Muslim population. Brussels has responded to the security challenge by restructuring its security-related departments; using force to neutralise potential threats; studying the social integration challenges facing Belgian Muslim communities; and enhancing cooperation with partner states on counterterrorism matters.

The history of terrorism in Belgium has been shaped by shifts in the global conflict landscape. This form of political violence has moved from being perpetrated by secular groups opposed to global capitalism to faith-based ones aiming to install an Islamic theocracy. In the 1970s and 1980s, the state contended with the violent activities of Cellules Communistes Combattantes, an outfit committed to an anti-capitalist agenda. Aside from this secularist strand, the state was also concerned about religious-related terrorism linked to the Iranian establishment. Although having Islamist connotations, this political violence was rooted within the broader, secular domain of Cold War politics.

The trajectory of terrorism in Belgium started changing with the onset of the post-Cold War era. With the disintegration of the Soviet Union, the world started contending with a critical legacy of the Cold War—the Mujahideen. These were Muslims from all over the world who had violently opposed communism in Afghanistan and were subsequently seeking to pursue their Islamist agenda in their countries of origin. Algeria was a flash point in this evolving phase given that in 1992, the military had intervened to prevent the Islamic Salvation Front (FIS) party from democratically seizing power. Consequently, Algeria was gripped by a series of overlapping Islamist insurgencies. France, part of whose citizenry is of Algerian descent, was peripherally sucked into this conflict because it did not firmly reproach Algeria, a former French colony. To this effect, Paris became a target of the Algerian insurgent outfit, the Armed Islamic Group (GIA).

The threat of Islamist terrorism became vivid to the Belgian authorities with the discovery of a GIA support cell in the country. In March 1995, Belgian police arrested Ahmed Zaoui, a former FIS leader. He had been at the forefront of supporting GIA which was linked to a bombing campaign in Paris. From being the logistical center for Europe’s mushrooming Jihadist community, Belgium progressively evolved into a fully fledged base, performing planning and recruitment functions. In March 1998, the Belgian authorities arrested Farid Mellouk and other militants in the country. The discovery of the Mellouk network was significant in the way it revealed how Belgium had become a melting pot for European Jihadism. The militants caught in this operation were of different nationalities. They had trained in Al Qaeda camps in Afghanistan and were in possession of a 60 page manual compiled by Groupe Islamique Combattant Marocain (GICM), the group linked to the Madrid attacks of 2004.

In raising its profile as a Jihadist center, Belgium did not restrict itself to acting as a base for plotting terrorist attacks in Europe. Some high profile attacks carried out in other parts of the world were plotted in Belgium. For example, Abdessatar Dahmane and Baraoui el Ouaer, the suicide bombers who killed Ahmed Shah Massoud, the leader of the anti-Taliban Afghan Northern Alliance, were illegal residents of Belgium. In more recent times, Belgium cemented its Jihadist credentials by providing the first Western female suicide bomber, Muriel Degauque, who attacked an American military patrol in Iraq in 2005.

Given that at the time, most Belgian Jihadist attacks took place abroad, it appeared that domestically, there were negligible contradictions that would have constituted Belgium into a target of home-grown terrorism. This notion rested on shaky premises. Due to economic hardship, Belgians of Moroccan and Turkish descent were struggling to fit into mainstream Belgian society. Faced with these challenges, some of these communities sought solace in religious revival which offered them a sense of belonging. The critical influences on these communities were the Muslim Brotherhood, which was pursuing an Islamist agenda in Egypt and the Mujahideen campaign in Afghanistan, which some Belgian Muslims joined. Despite the propensity for these communities to be alienated, there have been generational differences in susceptibility to alienation.

Despite being born into relatively improved economic conditions, the current young generation of Belgians of Arab descent posts poorer linguistic skills than their parents. This undermines their competitiveness in the Belgian job market. With Islamist campaigns emerging in their ancestral lands, Jihadism then evolves into an attractive alternative vocation for some of them.

This explains why some of Belgium’s Jihadists have come from criminal backgrounds. Fouad Belkacem, the jailed leader of Shariah4Belgium was a petty criminal before becoming a religious fanatic. The same can be said of Abdelhamid Abaaoud, the leader of the Verviers cell. Before embarking on his career, he had a record of theft and assault charges. For these individuals, Jihadism provided an escape route from a career of despair, which could partly be attributed to the challenges of social integration of Belgians of Arab descent.

When the threat of Islamist terrorism emerged, the Belgian authorities responded by creating a unit under the Anti-Terrorism Gendarmerie to specifically investigate radical Islam. This measure was an appreciation of the uniqueness of the security problem facing the country. However, it was a blanket labelling of a specific religious denomination as a source of insecurity. Since only a minority of Belgian Muslims were involved in terrorism, this measure was bound to alienate the majority of this population segment which was uninvolved. To address this issue, the police undertook to understand Belgian Arab-Muslim communities. Police officers studied Arabic and Islam and also established contacts within these communities to provide them with a better understanding of the problem.

The above soft approach was consolidated at the legislative level to try and make the Belgian Muslim community an integral part of Belgian society. To this end, Islam is one of six religions recognised by the state. Among others, this denomination enjoys the right to religious instruction in public schools and state subsidies.

Brussels pursues the soft approach alongside a hard one that involves the institution of tough anti-terror legislation and the physical dismantling of terrorist networks. In 2003, the country adopted anti-terror legislation that prescribed jail terms ranging from 20 years to life sentences for individuals found guilty on terrorism charges. Over the years, the police has also conducted a number of successful counterterrorism operations including Operations Mezze and Goal that uncovered the planning behind the assassination of Shah Massoud in 2001 and Operation Asparagus that dismantled the Maaseik network that had brought together terrorist operatives in the asparagus-growing Belgian town of Maaseik along the Dutch-German border.

The above operations were successful partly because Belgium adopted an intelligence led counterterrorism strategy. In doing its work, the Federal Police liaises with the State Security Service and the General Intelligence and Security Service which are the civilian and military espionage branches of Brussels’ counterterrorism efforts respectively. For effective oversight, the former and latter departments are under the jurisdictions of the Ministries of Justice and Defence respectively. Reliance on intelligence ensures that the state acts on the basis of accurate information. This minimises the occurrence of botched-up operations that could alienate segments of the population.

On the external front, the State Security Service (while Belgium held the European Union presidency) prevailed upon its counterpart intelligence departments to create a Counterterrorism Group. Although the original proposal to form a European Intelligence Unit was rejected, Belgium succeeded in tabling the idea of intelligence-led counterterrorism in Europe.

In summary, the Verviers raids were the harder dimension to Belgium’s on-going campaign against Islamist terrorism. The softer side involves hearts and minds efforts aimed at socially integrating the country’s Muslim communities. To realise better results, Syria would have to stabilise and cease being an attractive war theatre.

Herman Butime holds a PhD in Terrorism Studies from the University of Wollongong in Australia.