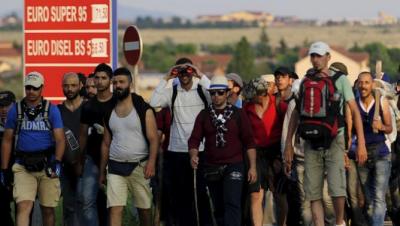 ROME - Europe was constructed without secure beams, and those are now visibly coming apart.  The  idea that a common currency would be enough to integrate 28 countries could  have held true with the appropriate generation of politicians still in place. But the present one is incapable of dreams and visions, and the refugee crisis is a good example.

So far this year, we have been observing the North-South divide.  Creditor countries in Northern Europe did not want to put their resources at the disposal of debtor countries in the South. East Europe unanimously followed the North, with few asking why.

Now another divide emerges: between Europe´s East and West. Eastern European countries do not intend to assume any responsibility in the refugee crisis, and the image that came to symbolize this attitude was that of female Hungarian journalist Petra Laszlo, caught tripping a running father with his child.

Let us now make some reflections.

The first one, on Europe’s identity. Many take for granted that all European countries share a common history and culture.

Yet, Ukraine is there to show us that when you form a country from a territory which, on the one hand was under German domination, and on the other under Russian, the result, even having in Ukrainian a national language and plenty of common history, is not automatically a success story.  It means that history is much more important than we tend to assume, with the consequence that we overlook a simple historical fact: the Europe that was projected onto the world was only the image of its Western half.

At the time of colonies and empires, Europe was Portugal, Spain, France, Italy, the Netherlands, Belgium, England and Germany. (Denmark had a little Caribbean colony, but it is enough to have a right wing government to plunge it into isolationism). No Eastern European country, beginning with Austria and ending with Poland, ever had a colony. And later, when international relations went from consisting of colonialism and imperialism to focusing on trade and later finance, no international or transnational company emerged in Eastern Europe.

The international Europe was, in fact, Western Europe. In 1991, at the end of the Cold War and with EU financial support, the Society for International Development organized a conference at the Diplomatic Institute of Vienna to which the chairmen of the Senate and Parliamentary Foreign Affairs committees of the now "free" Eastern European countries were invited. The general expectation was that they would join the EU.

The SID, together with the Commission for Development Aid, wanted to hear these countries’ views on the relations with the Global South. The meeting was supposed to start at 9 am, and by 9.45 not a single one of the parliamentarians had shown up.

The Austrians were very surprised, as the punctuality of Eastern Europe under communist protocol was famous. At 10.15, all the delegates arrived. The chairman of the foreign affairs committee of the Polish parliament was entrusted with the task of speaking on behalf of all the region. He apologized for the delay, arguing that since they had never met before, they needed to come up with a common position.

In a few sentences, this is how we can summarize the position of the Polish delegate: a) we do not feel grateful to Europe, but to the United States. If it was not for them, we would will still be under communism (Reagan´s administration was speaking enthusiastically about these countries as the ‘New Europe’); b)We spent lots of money and efforts in Africa, Asia and Latin America, because we were instructed to do so by the Soviet Union as part of our duties during  the cold war; c) Now that we are free, we could not care less about those countries. We must first develop ourselves, and when we will reach the level of Western Europe, we will again think about the South.

Communism, from which the US has liberated us, deprived us of your living standards, and this is what our citizens want, as well as the West’s duty). We would  much rather join the United States. This being impossible, we will join Europe. But we do so to get the resources that we need, and it is your duty to provide those to us.  And our position is that you must stop allocating resources to Africa, Asia, Latin America, and instead redirect those resources, as well as any additional money you can find, towards us.

Obviously institutional processes and the mere passing of time have changed this discourse. Thanks to the EU’s quota allocation system, following the EU’s eastward enlargement a Lithuanian who had never set foot in Latin America became responsible for the region.

Nevertheless, this dramatic wave of refugees is a direct consequence of Europe’s and the US’s policies in the Arab world. The invasion of Iraq, and especially the actions of the incompetent, American-sponsored administration that took over after Saddam, which opened a Pandora box out of which the Islamic State emerged.

To this we have to add the ‘brilliant’ intervention in Libya led by Nicolas Sarkozy (French President between 2007 and 2012), the equally disastrous post Gaddafi era and US and European meddling in Syria. The 200.000 dead Syrians and the more than 4 million refugees are on the conscience of Russia, the US, or the many European and Arab countries that are fighting a proxy war in Syria.

But  this is not what  the citizens of Eastern Europe think. They feel that they had nothing to do with the invasions in the Middle East. And now, they claim, those responsible for this mess, those making decisions in Brussels, expect us to show solidarity? We joined Europe to get aid and tourism, not immigrants, and Europe has betrayed our expectations and hopes, things did not turn out as we had expected. The prestige of the EU is at an all-time low. And now we should take refugees, feed them, while we are still far from attaining Western living standards? This perception also explains Eastern Europe’s indifference to the Greek drama. Symptoms of the fact that the Europe of 28 members, ripped apart by a north/south and an east/west divide, is built on shaky beams.

We need to reflect on an additional, unpleasant fact.  We all welcome Merkel’s leadership on the refugee issue. But we must realize she is following her brain more than the heart.

For five years now Merkel's  presidential advisers have been presenting her demographic projections, based on UN data, which indicate that Europe and Germany need a strong immigrant influx if they wish to remain internationally competitive ( see EU projection chart: http://ec.europa.eu/eurostat/statistics-explained/index.php/Population_and_population_change_statistics ).

UN projections mention adding at least  20 million people in the short term, to offset the lack of fertility. All elementary teachers in Europe know very well that the number of schools and classes are shrinking due to the demographic decline.

This well-known phenomenon should be linked to the future of Europe. Yet this region of nearly 500 million people has for 3 months been debating how to accommodate 45.000 people, pressured by the rise of xenophobic parties, in what is a good example of how Europe has lost its compass.

In Lebanon refugees make 25% of the population, whereas the last wave of refugees to the EU constitute a negligible 0.11 per cent of its population. The 11 million undocumented immigrants in United Sates make up 3.5% of a racially heterogeneous population of 320 million.

But let us look at the example of Spain, a leading voice in opposing EU proposals for resettling refugees. Foreign students represent 10.6% of the total number of students compared to 14.3 five years ago. The number of schools dedicated to integrating foreign children has fallen from 230 in 2006 to 62 currently. As Latin Americans leave, schools are shrinking.

Merkel is well aware that starting next year, the German population will begin to shrink. Russia is now loosing 800.000 citizens per year, and by 2050 Turkey will arguably have an equivalent population.

Merkel was wise to ride the wave of emotion following the diffusion of images showing a child washing up on a beach. The 20.000 who died before him were ignored. Her initiative also had the positive effect of putting rightwing European parties against the wall. But there are 60 million refugees in the world, and there is no policy of responsibility towards them.

The US acts as if it had nothing to do with the four million Syrian refugees. Those have escaped mostly to non-rich countries like Lebanon, Jordan and Turkey.  Only a small part is reaching Europe, and none the US. America took 207.000 Vietnamese and 80.000 Cubans in a month alone, during the Mariel boatlift.

Now Obama talks of receiving 10.000 Syrians, and none of the 14 presidential candidates have made the refugees into an issue during presidential debates.  And forget the monarchs in the Gulf countries, who have been actively involved in the destruction of Syria while refusing to take any refugees. Through large financial contributions that fall considerably short of what they have invested in the war, they are trying to whitewash their role.