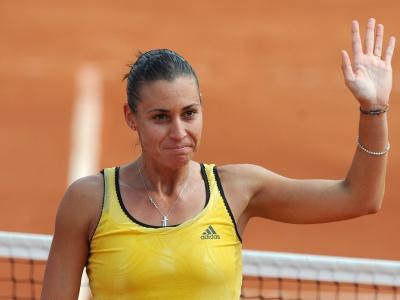 NEW York -- Flavia Pennetta came from a set down against Petra Kvitova to join compatriot Roberta Vinci in the last four of tennis’ season ending major. It is the first time in the history of the Open era that two Italian women have made the semi-finals in a Grand Slam.

The 26th seed Pennetta previously reached the last four in New York in 2013, before losing out to Victoria Azarenka and will be hoping to go further this year after a spirited fight back against the Czech, Kvitova. Pennetta eventually overcame her opponent 4-6, 6-4, 6-2 and will now face the second seed, Simona Halep, in the semi-finals.

Three sets were also required for Roberta Vinci on Tuesday, who defeated Frenchwoman Kristina Mladenovic, 6-3, 5-7, 6-4. Vinci is renowned as an exceptional doubles player and indeed boasts a career Grand Slam in that format of the sport, however despite playing for nearly two decades, this will be the 32-year old Italian’s first semi-final in a major.

Standing in the way of Vinci for a place in the final however is arguably the greatest ever to play the game, in Serena Williams. The American outlasted her sister Venus in the quarter-finals and is looking to create history by becoming the first woman since Steffi Graf in 1988, to win all four majors in a calendar year.

Facing Serena in New York is without doubt the toughest challenge in women’s tennis today and the odds will be firmly stacked against Vinci for Thursday’s match. However, as plucky Brit Heather Watson showed in her narrow defeat to the American at this year’s Wimbledon, if you somehow manage to unsettle Serena, there is a faint glimmer of hope.