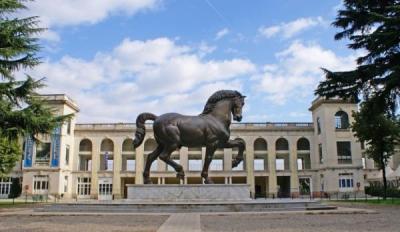 MILAN — Angela Paula Terase, an English amateur jockey, aged 52, is in a coma following an accident during horse training for a competition at the San Siro racecourse, doctors said Wednesday. The accident happened Tuesday at around 6:30 a.m on the Trenno racetrack. Gregorio Arena, a professional jockey of 29 years old from Catania, was injured in another accident on the same racetrack at 7:30, and is in a stable condition. Both were caused by an unexpected hole in the ground.

Arena was admitted to the San Carlo hospital, and doctors last night were considering whether to operate on his head to reduce the size of the hematoma, which was caused by the fall. Since, they have decided not to operate on him, as his state has improved. However, they did operate on Angela Paula Terase.

The company Trenno, which manages the racecourse, said that assistance was immediate, thanks to the ambulance and doctor, which were both on site, and that both the jockeys were wearing all the necessary protection at the time of the accidents, a helmet and padded waistcoat. Both the Milanese local health authorities and Forensics were on the scene to conduct the necessary evaluations.

Neither of the horses involved in the accidents, Madiam and Pittura d’Arcadia, are allegedly harmed.

The rapid response team are investigating both incidents.