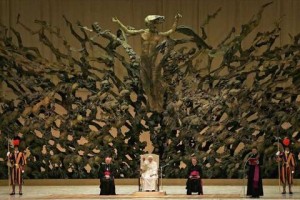 VATICAN CITY- In a speech at the Vatican last Wednesday, Pope Francis defended divorcees, saying that they are still a member of the Catholic Church despite the Church’s traditional beliefs on marriage and divorce.

“Those who have begun a new union after the failure of their sacred marriage are by no means excommunicated, and under no circumstances are they to be treated as such: they remain as a part of the Church.” Pope Francis said in his first general audience following his summer break, in the Paul VI audience hall to more than 7,000 people. After having talked with families separated by divorce, the Pope wishes for Catholics to instead focus on supporting those who have previously suffered an “irreversible” marriage break in their new unions.

Whilst the Pope fully acknowledges that this may contradict the Christian sacrament, he said that the Church always looks for goodness and salvation of people. According to him, this is why, for the search of the truth, the Church feels the need to understand the context and the situation of a divorce case, as former pope John Paul II explained in his work Familiaris consortio.

The pope continued, saying that it would be unjust to ostracise divorced parents if they had done everything to bring up their children with Christianity. “We must not add another burden to the children of a divorced couple,” Pope Francis said, and explained that the Church must be there for children affected by divorce like an “attentive mother”. The Pope said the Church has counselled followers effectively in the last few decades, thanks to the further training of pastors and ministers, and he calls for a completely “open-door Church”, which has “a seat for everyone”. Pope Francis concluded by urging followers to “be the good shepherd” and care for those, divorced or not, according to the teachings of the Catholic Church.