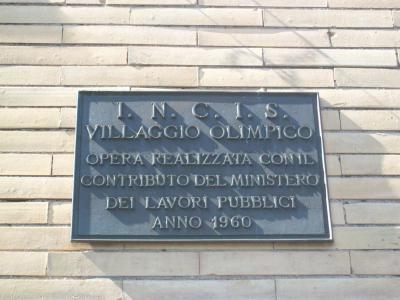 ROME – Architects Moretti, Cafiero, Monaco, Libera and Luccichenti designed Rome’s Olympic Village for the 1960 Olympics, and beyond. After the Games, the 1,800 apartments who had lodged athletes were to become council homes for civil servants and their families. Though “Villaggio Olimpico” houses the finest works of seven most prodigious architects, few people –locals as well as tourists– know this gem of modernist architecture.

A stroll between the buildings reveals a leafy neighbourhood with plenty of open space. Situated between the Tiber and Flaminio, the site still is a village that the ever-expanding Eternal City has never managed to swallow.

Villaggio Olimpico breathes an exceptional harmony. There are ten different types of buildings, yet the differences lay in the details. Each type has a yellow brick façade, for instance, but differs in the lining of its bricks.

Strips of housing are lined in an angle vis-à-vis a viaduct and render the Village with a rigid geometry. Although the viaduct seems to cut the neighbourhood in half, it allows east-west pedestrian movement. The Corso Francia Viaduct is a creation of Pier Luigi Nervi, the famous engineer-architect who also designed the nearby stadia.

During the 1960 Olympics, the neighbourhood welcomed Italy’s first supermarket. Also innovative were the materials and concepts that were used in the Olympic Village: cement pillars, sloped zinc covers and a semi-integrated central heating system. Stilts raise every building one storey off the ground. Walking below the buildings, one can cross the neighbourhood in record time!

Whereas on weekdays the broad avenues become a circuit for driving schools, in the weekend they serve as a parking lot for tourist coaches. In Villaggio Olimpico one becomes aware of the importance the car has in modern society. Owing to the fact that the neighbourhood is void of garages, every car is clearly visible. Especially in the evening one realises how many cars go with an apartment building.

The Village’s residents either love or hate their neighbourhood. Whereas the former laud the neighbourhood’s open spaces, the latter condemn its relative state of neglect.

After the Olympics, the estate’s maintenance was transferred to another body. The heating centrals became inactive –they now serve as storage places for garbage– and the greenery constantly needs attention.

During the '90s the area degraded. Neighbourhood committees complained about the noisy rock concerts in the Stadio Flaminio and the transgender prostitutes that worked the streets at night.

Because of the Village’s original vocation and its open spaces, it would house Rome’s new auditorium. In 2002, the city council inaugurated “Parco della Musica”. Though beautiful as a building, Renzo Piano’s creation does not quite fit the village’s pattern. Its success transformed the neighbourhood. Rents skyrocketed –the original residents refer to newcomers as “the rich”. Is the Olympic Village becoming an extension of Parioli?

With ownership being transferred from rental to private property, common elements such as the wooden roll-down blinds and steel windows are now being replaced on individual basis. These replacements will affect the village’s delicate harmony.

The neighbourhood is awaiting rezoning and, hence, building permits. 1,800 apartments on 115 hectares of premium land must sound like blasphemy to any property developer, doesn’t it?

Along with Paris, Dubai and other capitals, Rome is bidding for the 2024 Olympics. The organising city will build an Olympic Village that afterwards may be turned into permanent housing. Rome’s Villaggio Olimpico is a reference, both its design and its maintenance, for every candidate city, including Rome.