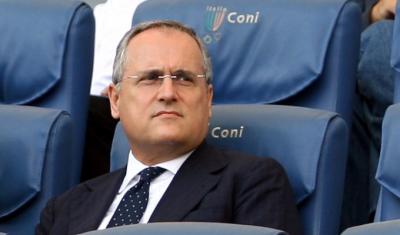 Claudio Lotito is currently being investigated by police
ROME - Claudio Lotito, chairman of Serie A outfit SS Lazio has been put under investigation by police in relation to alleged attempted extortion.

Police searched Italian Soccer Federation (FIGC) offices in Rome as well as Lotito’s house after receiving a recording of a phone call by Pino Iodice, the director of sport of Lega Pro side Ischia Calcio. The allegations predominantly concern federation funding granted to clubs and Lotito expressed concern over the negative impact the promotion of smaller outfits to Serie A might have on the global reputation of Italian football, notably Carpi's recent promotion to Serie A.

In the conversation recorded by Iodice, the Lazio chairman stated Carpi were "not worth a cent" and that some broadcasters could refuse to pay for TV rights if they or other smaller, unfashionable clubs were to gain promotion.

Lotito, himself an FIGC board member is accused of an alleged 'mechanism of intimidation' by the Ischia director of sport who told reporters that he acted “for justice, because football is a part of my life. I did it only for the good of football."

Not particularly popular amongst the fans of I Biancazzurri despite avoiding bankruptcy and enjoying relative success winning the Coppa Italia twice in a reign that began in 2004, Lotito has described the investigation as “defamatory and slanderous” maintaining utmost faith in the justice system.

Also questioned during the raids, FIGC President Carlo Tavecchio is said to be co-operating with the investigation according to a federation statement.

Two of the smaller clubs in question Carpi and Frosinone both won historic promotions, along with former Serie A champions Bologna who will all battle for survival in the 2015/16 season.