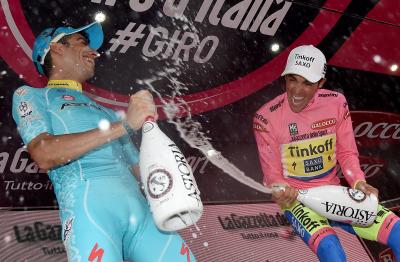 ROME – Spain's Alberto Contador rode to an impressive victory at the 98th edition of the Giro d'Italia, in what many are already calling one of the most enjoyable stage races in recent memory. Second and third places were taken by the young Italian, Fabio Aru and Contador's compatriot Mikel Landa, who both ride for Astana.

The Tinkoff-Saxo rider took his seventh official grand tour title in Milan – he was controversially stripped of his 2010 Tour de France and 2011 Giro titles after a urine sample was shown to contain traces of clenbuterol, a banned substance – and is aiming to add another in Paris this July when he attempts to win a rare Giro-Tour double, something only seven riders have managed to do. It's been 17 years since Marco Pantani pulled off the memorable feat, but after a dominant display this May in Italy Contador's team will be optimistic about the 32-year-old's chances.

Astana showed that they are currently the best grand tour team, but in spite of being out numbered and out gunned on most of the Giro's most difficult climbs, Contador was still able to keep pace with his main adversary, the 24-year-old Aru who is expected to develop into one of the sport's biggest stars. The Sardinian rider showed his inexperience on several occasions during this Giro, from suffering from hunger to not acting decisively enough at key stages when the Spaniard was in trouble.

Speaking at the press conference in Milan after the Giro's final stage, Contador told the gathered media: “I thank the people of Italy for their affection. Everyone has been very special with me and I am very happy. During the three hard weeks of the Giro,  everything imaginable has happened: I came here thinking about victory having prepared very carefully, but then I had my fall and a shoulder injury.

“There was the mythical climb of the Mortirolo,” the Spaniard continued, in reference to his performance on one of the sport's hardest climbs, when he rode imperiously in spite of losing time when his rivals contentiously attacked him when he suffered a puncture, something that's traditionally been viewed as bad etiquette in the professional peloton. “But then on the Colle delle Finestre I had bad legs. It has been a beautiful Giro, and a very special experience for me. I don't know how long it will take to recover. I'm tired, and I know it will take time. It has been an emotional Giro for me. I've said it will be my last, but you never know. Never say never.”

Contador must now focus on being ready for the Tour de France's start in Utrecht on 4 July. There he will face stiffer opposition than at the Giro, and if he wants to be on the top step of the podium on the Champs-Élysées he'll have to deal with Team Sky's Chris Froome, Movistar's Colombian sensation Nairo Quintana and the reigning champion, Aru's teammate Vincenzo Nibali.

Addressing his Tour challenge and the fatigue that could hamper him against the fresh legs of Froome, Quintana and Nibali, Contador was bullish. “I see it like this: there were days when I could have been more ambitious. I decided to to ride more tactically, and I think it was the right thing to do. There is nothing I think that I could improve on for the Tour.

“My Tour de France starts now. My preparation starts now. Tonight, to the extent to which it is possible, I'll go and rest as early as possible. Tomorrow I want to go to Spain. I want to take three or four days before I start concentrating again on the Tour.”

Contador and Aru – who won two stages in convincing style and will be aiming to take the winner's pink jersey in 2016 – lit up the race with an exciting brand of attacking, dramatic cycling but perhaps the real star of this year's Giro was the route, that began on the Ligurian coast and then worked its way down through Tuscany, Lazio and Campania before a dramatic final week in the high mountains of the Dolomites and the Alps.

The director of the race, Mauro Vegni, praised the riders, the fans and also his own team, saying: “They have all been beautiful days. This Giro d'Italia has been competitive from the first stage. What I've found truly important about this race, at least, for the fans, the public, the followers, is that there have been no dead moments, by which I mean, transitional stages. They have all been raced, as you have seen, it was enough to drop the flag and they were coming past left, right and centre. It seemed always that they always had to race. This has made for a beautiful, intense race, so I give 10+ to the riders, and eight out of 10 to the race route.”