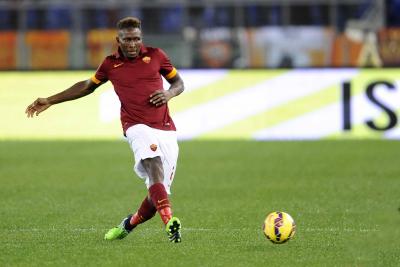 The man of the hour Mapou Yanga-Mbiwa, 26,

AS Roma sealed an automatic Champions league Group Stage place with a fiery win over SS Lazio at the Stadio Olimpico. Ex-Newcastle defender Mapou Yanga-Mbiwa's dramatic 85th minute winner for the visitors was eventually marred by an ugly aftermath as Lazio fans clashed with police following their team’s 2-1 loss.

Historically one of the most violent matches in world football, the Derby della Capitale between two of Italy’s most successful teams took place on Monday night in Rome. As has been rarely the case in recent times, this year’s clash between Roma and Lazio marked the penultimate game of Serie A and counted for considerably more than just bragging rights. Both teams went into the game separated by a single point and with a £50m Champions League qualification place at stake there was volatility in the air from the off.

The game started as anticipated with an early yellow for the talismanic Francesco Totti, now in his 38th year, for a vicious challenge that might have warranted a red. This set the tone for the first half as a tense war of attrition continued between the two teams with neither side finding the quality to produce an opener despite Miroslav Klose going close for the hosts early on.

Roma, knowing a win would be enough to secure the league’s runners up spot had arguably more to lose going into the game. Champions League qualification for the club is now a consistent year-on-year necessity in order to finance a planned new £500m home stadium and they accordingly started the second half brighter than their rivals, finally making the break through on 73 minutes with a close finish from Juan Iturbe. Lazio, having lost on Wednesday night after extra time in the Coppa Italia to Juventus, bounced straight back when Klose nodded down an excellent cross for Serbian Filip Djordjevic to head into an open net to level the score. Roma however, had the final say when young French international centre back Mapou Yanga-Mbiwa got on the end of a Miralem Pjanić free kick to book i Giallorossi a guaranteed place in next year’s Champions League.

“This was a huge achievement,” Roma’s midfielder Daniele De Rossi told reporters. “This success should be a starting point for us.”

SS Lazio must now avoid defeat against fourth-placed Napoli on Sunday evening who trail them by three points having lost 3-1 to Scudetto champions Juventus on Saturday, but Rafael Benitez’s men will surely not give up without a fight.