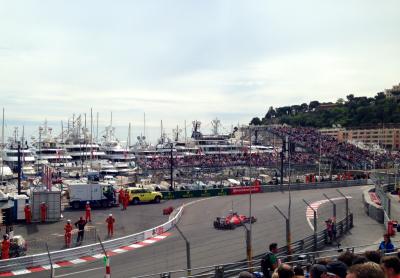 MONTE-CARLO – Nico Rosberg claimed his third career victory on the streets of Monte-Carlo on Sunday as a major blunder by Mercedes denied his teammate, Lewis Hamilton, a deserved victory. Ferrari’s Sebastian Vettel continued his excellent recent form with a second place finish, with Hamilton relegated to third.

On a weekend, which saw Mercedes, and in particular Hamilton dominate, it seemed unjust for a team error to cost the British driver a memorable Monaco victory. Hamilton had led the race in extremely competent fashion and with eight laps to go, was in total control at the head of the field. However, after 17-year old Max Verstappen hit the tyre wall with eight laps to go, Mercedes decided to pit Hamilton after a deployment of the safety car.

This was to prove to be the fatal error, as the Briton’s team misjudged the gap between their driver and Rosberg and Vettel behind, with both able to pass Hamilton before he rejoined. Due to Monaco’s notoriously tight track, despite having fresher tyres due to the pit stop, Hamilton was unable to pass even Vettel during the remainder of the race, finishing in a desperately disappointing third place.

Rosberg’s win sees him cut Hamilton’s lead at the top of the drivers’ championship to just 10 points with Ferrari’s Sebastian Vettel a further 18 points behind. Rosberg, who lives in Monaco, and his father Keke are the only father and son pairing to have both won the Principality’s most famous motor race, with Rosberg senior triumphing in 1983.

“Lewis did a great job, he deserved to win. I also feel for him,” said Rosberg after his victory. "It's a horrible way to lose a race. I have a lot of empathy towards him because I know how horrible a day it is for him after such a strong weekend, and to lose it right at the end like that.”

Following the conclusion of the race, Hamilton stopped his car at the Portier corner, which looks out towards the Mediterranean and seemingly took a moment to compose his thoughts. Despite an extremely frustrating outcome, the Briton knows that one swallow or equally Formula 1 race does not a summer make.

“I can't really express how I feel so I won't even attempt to,” Hamilton told reporters after the race. “I'm sure we will sit down afterwards and try to think of ways we can improve. I'll come back to win the next one."