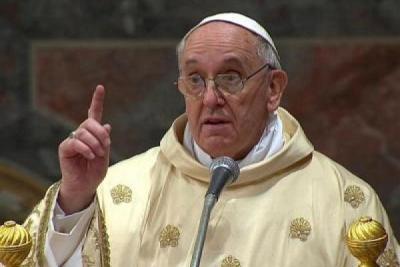 ROME - Turkey has recalled their special envoy to the Vatican, following Pope Francis’ comments that the widespread killing of Armenians in the Ottoman Empire during World War I, constituted a ‘genocide.’

The Pope’s comments came at a mass in the Armenian Catholic rite at Saint Peter’s Basilica on Sunday, which was also attended by the President of Armenia, Serzh Sargsyan. The term genocide had previously been referred to in conversation between, Francis’ predecessor Pope John Paul II and Catholicos Karenkin II, however had never been used in an official speech until Sunday’s mass.

Using the former pontiff’s words, Francis referred to the mass killing of Armenians as the “first genocide of the 20th century,” before mentioning the subsequent Nazi and Soviet instigated genocides. “Concealing or denying evil is like allowing a wound to keep bleeding without bandaging it,” Francis added. According to certain historians, up to 1.5 million Armenians were killed during the first world war period and its aftermath.

However, the remarks have drawn an angry response from Turkish diplomatic leaders. According to reports in the international media, upon hearing of the pontiff’s words, the Turkish ambassador to the Vatican was ordered to Ankara to explain the comments before being withdrawn from Rome.

“The Pope’s statement which is far from the legal and historical reality, is simply unacceptable,” tweeted Mevlut Cavuyzoglu, Turkey’s Foreign Minister. “Religious offices are not places through which hatred and animosity are fueled by unfounded allegations.”

The Pope is yet to release an official statement concerning the response to his comments however in a homily delivered during Monday morning mass, Francis said that “openness” must be a symbol of the church and words must be spoken frankly.

Meanwhile, Italian Foreign Minister, Paolo Gentiloni offered his support for the Pope earlier on Monday. "The toughness of the Turkish response does not seem justified, especially when taking into account the fact that 15 years ago, John Paul II had expressed similar,” said Gentiloni.