Tevez the star as Juventus brush Dortmund aside 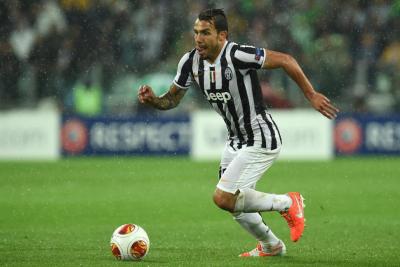 Rome - Juventus eased into the quarter-finals of the Champions League on Wednesday night, beating Dortmund 3-0 at the Westfalenstadion. Goals from Carlos Tevez and Alvaro Morata helped the Italian side to a 5-1 win across the two legs.

Gone are the days of Zinedine Zidane and Alessandro del Piero tearing teams apart in the black and white of Juventus, however the Bianconeri are once again becoming a force to be reckoned with in Europe. Their current team has an impressive blend of youth and experience and underlined its potential by demolishing a Dortmund side that was yet to lose at home in European competition this season.

Borussia Dortmund’s manager Jürgen Klopp commented before kickoff that his side were facing the toughest challenge in football, in having to score against an Italian team who would qualify with a 0-0 draw. However Dortmund’s task became much more difficult after just three minutes. The ball fell kindly to Carlos Tevez, who rifled home from 25 yards to make it 3-1 to Juve on aggregate.

The German side recovered well from the early set back and began to grow into the game, however were faced with a well drilled Juventus defence and struggled to find space in the final third. This pattern of play continued into the second half with the Italians happy to sit back and hit Dortmund on the counter-attack. Eventually such a move led to Juventus’ second goal with Tevez squaring for Alvaro Morata, who slotted into an empty net on the 70 minute mark.

With Dortmund now needing four goals to progress, the contest was effectively over but there remained time for Tevez to gloss his impressive performance. The former Manchester United striker kept his composure to beat the onrushing Weidenfeller and seal a 3-0 win for his side.

There are those who think this Juventus team is poised to make serious progress in the Champions League this season. Undoubtedly the Italians will be hoping to avoid Barcelona, Real Madrid and Bayern Munich in the draw for the quarter-finals which takes place on Friday, however following this performance, the team will fear nobody.

"It was a beautiful night, but now we must not stop: we must look forward, and wait for the draw," Juventus manager Massimiliano Allegri told reporters. “We showed we can play. This result is deserved, but not we must stop here: we must try to move forward."