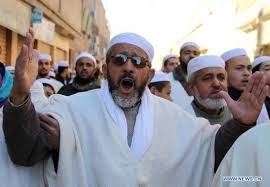 New York- Despite President Bouteflika’s 2011 promise to reform the system and new laws on political parties and freedom of assembly, Algeria has apparently made no real progress on human rights.

The opposition plans to hold rallies throughout the country to urge changes to the status quo. Meanwhile, Human Rights Watch has published its 2014 report on the situation. The report alleges that the government’s tight rein on union rights and freedom of assembly and association. It goes without saying that the Algerian authorities are imaginative, so much so that they have come up with a new concept of “democratic management of protest.”

The regime has a number of pre-emptive strategies to deter public gatherings and protests and disrupt them if they take place. These include arresting the organisers and blockading the location earmarked for the planned protest.

This is what happened to Taher Belabes, coordinator of the National Committee for the Defense of the Rights of the Unemployed in the southern city of Ouargla, 750 kilometres south of Algiers. He was arrested and the planned protest could not take place. Another way to harass activists is to withhold legal status from independent unions.

The Union of Higher Education Teachers applied for registration in 2012 but so far, it has not even been acknowledged as received. This means that this particular union still does not legally exist. This adds to the problem that it would face anyway if it tried to press charges on any issue: the judiciary is receptive to government pressure.

But despite the problems they face, civil society activists have continued to protest against the status quo. It’s well known that the open-ended, blanket ban on demonstrations in Algiers has been in effect almost as long as Mr Bouteflika has been president. Last year, he was re-elected to a fourth term despite his deteriorating physical health. It is worth noting that most protests and demonstrations in the country are non-violent.

However, in the desert city of Ghardaia, 600km south of Algiers, there have been fierce sectarian clashes, resulting in numerous fatalities. The clashes were between Berber Ibadis, who predate Arabs and subscribe to an early Islamic movement before Shiite and Sunni denominations, and the Arab Sunni Maliki communities.

Historically, these communities have lived in peace but the new discord is driven by the inability of the Algerian state to address the real causes of the strife. This includes instituting measures to help dispel the sense of grievance felt by the minority Ibadis. The government has lamentably failed to act on this and other pressing issues, even as it continues to black out coverage of the Ibadi-Sunni clash.

The government controls all radio and television stations, including those that are privately-owned. All of them have to broadcast the official line. Though privately owned Arabic and French newspapers exist, they face a different issue. These papers emerged after the 1988 October riots, which set in motion a process that led to the fall of Algeria’s single-party system and the introduction of democratic reform, but also caused a period of great instability and political conflict.

The reporters on some of these newspapers can be very assertive. And yet, most dailies rely on the state-owned advertising agency, which favours the pro-regime press. It’s not hard to discern the impact this has had on freedom of speech. But it is under the law on information, that the young blogger Abdelghani Aloui was charged with “glorification of terrorism and insulting state institutions.”

All he did was to post to Facebook a number of cartoons about president Bouteflika’s health. But the real terrorist threat is posed by Al Qaeda in the Islamic Maghreb and by ISIL. Attacks on police officers and soldiers by AQIM are on the rise. And ISIL is gaining strength. The abduction and beheading of Hervé Gourdel, the French mountain guide, by ISIL franchisee Jund Al Khilafa (Soldiers of the Caliphate) is a case in point.

Algeria is still seen as a regional key player in the war on terror, but will it be able to combat extremist groups without violating people’s rights? Despite the government’s pledges to the UN High Commissioner for Human Rights, the regime has so far denied entry to UN agencies that seek to investigate claims of massive human rights violations, such as torture, disappearances and extrajudicial executions. These took place during the 1990s civil war and are yet to be addressed.