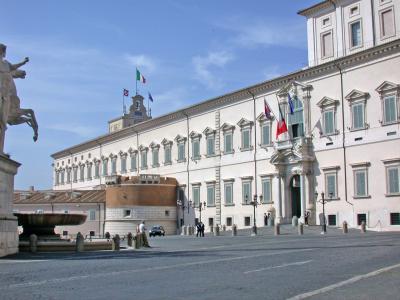 ROME – Italy’s parliament convenes Thursday to begin electing a new president -- the clock is ticking for Premier Matteo Renzi to find a candidate who can help boost his own political career. President Napolitano resigned earlier this month from the Quirinal Palace, officially because, with his 90th birthday approaching in June, he felt too old to continue, but unofficially, some commentators say, because of growing disgust at endless squabbling among Italian politicians. Whatever the case the resignation of the respected former communist plunged Italy into uncertainty. There are no obvious front runners to replace him. Italy tried first to find a successor for Napolitano in 2013 when he completed his first seven year term of office. But Napolitano subsequently agreed to serve a partial second term as president when none of the candidates could obtain a majority. This time he has insisted he won’t step into the breach again if there is a further stalemate, posing a major test for 40-year-old Renzi. Renzi has predicted a new head of state will be chosen before the start of February on a fourth ballot of the election involving more than 1,000 voters from the upper and lower houses of parliament and representatives nominated by regional governments. In the first three votes, a super-majority of two thirds is needed to elect the new president, while a simple majority suffices after that. “We’ll reasonably have the name of the new president by the end of the month,” Renzi said Wednesday. Renzi’s Democratic Party in theory has 445 votes. But since the vote is secret as many as 140 dissident party members known as “snipers” may vote against Renzi’s preferred candidate, meaning he must reach a compromise on someone acceptable to conservative former prime minister Silvio Berlusconi and the centre-right parties in the government coalition. Pundits expect the next president could be a low profile figure from the Catholic centre such as Sergio Mattarella, a former constitutional court judge, Anna Finocchiario, a Democratic Party senator, who would be first woman in the role, or Pierluigi Castagnetti, former head of the defunct Italian Popular Party close to the Vatican. More high profile candidates mooted are former EU Commission president Romano Prodi, former prime minister Giuliano Amato and Roberto Pinotti, the current defence minister. Stefano Folli, a respected commentator for la Repubblica newspaper, noted that many candidates being touted are lacklustre. “The names circulating at the moment are an indication that nobody has a clear idea who the next president could be.” Also mentioned often are former mayor of Rome Walter Veltroni and Piero Fassino, the mayor of Turin. Whoever wins must help Renzi get his package of political and electoral reforms through parliament now that his opinion poll ratings are flagging for the first time since he took office in February. The initial popularity for the energetic style Renzi developed as mayor of Florence since has waned as the Italian economic recession shows few signs of ending. Until last month, Renzi still won considerable approval at home for confidently vaunting Italy’s rotating six month presidency of the European Union, which ended Dec. 31. Assessing the six months Italy was at the helm in Brussels, however, commentators conclude that all too little was achieved of any substance. Renzi worked hard to make himself seem a visionary European, for instance visiting Tirana and saying that Italy strongly backs letting Albania join the EU together with other Balkan countries. In Ankara, Renzi’s rhetoric extended to reiterating Italy’s traditional support for Turkish membership of the European Union. In both cases such high-sounding pledges cost him and Brussels little. The European Commission has long since ruled out any new members joining the EU before 2020. Against this background, the electors in coming days will be discussing the candidates for Italy’s 13th presidential race in a series of campaign dinners being held in politicians’ favourite restaurants around Rome. The outcome of the contest will be a severe test of Renzi’s political calibre now that he can no longer rely on Napolitano, who during nine years in office deftly guaranteed Italy’s stability during one of the most turbulent periods of the peninsula’s history.