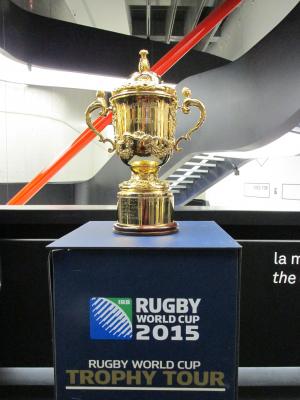 The Webb Ellis Trophy Tour team visited Rome this week for the Italian leg of their global journey ahead of the 2015 Rugby World Cup. During its stay in Italy the famous cup visited the HQ of the UN World Food Programme as well as local rugby clubs.

The tour is a unique blend of sponsorship and social responsibility, providing an interesting example of the power international sporting events have to benefit communities both locally and internationally.

The tour, sponsored by DHL and Land Rover, began last May in Japan. It will visit 15 countries over 12 months and seeks to raise awareness of the sport ahead of this year's Rugby World Cup in England. In each of the 15 countries on the tour the trophy is showcased for schools, local rugby organizations and dignitaries.

While in Italy the trophy was placed in the safe hands of Italian rugby legend Andrea Lo Cicero, capped 103 times by the Azzurri. In Milan, Lo Cicero accompanied the trophy to a DHL sponsored head-to-head event “Rugby Vs World Challenge” where he challenged 42 time giro stage winning cyclist Marco Cipollini in a series of sporting challenges of epic proportions.

Land Rover Ambassador Lo Cicero, then took the cup for a scenic off-road drive before paying a visit to children from local rugby clubs in Treviso. Lo Cicero, nicknamed “The baron” by rugby fans, told reporters: "It has been a wonderful experience to take the Webb Ellis Cup somewhere it has never been before and extremely rewarding to meet passionate young rugby fans in Treviso. Bringing the trophy here has stirred an even greater passion in this huge year for the game."

On Wednesday the famous cup stopped off in Rome where it visited the HQ of the UN World Food Programme (WFP), who have teamed up with the International Rugby Borad (IRB) as part of their “tackle hunger” programme. So far this year, the programme has raised of 21,000 dollars through voluntary online donations. Since its inception the programme has raised more than three million dollars for the WFP.

In a final appointment on Wed. the Webb Ellis was the guest of honour in an event organized by the British Embassy at the Maxxi Museum of Modern Art in Rome. Speaking at the event British Ambassador to Italy, Christopher Prentice outlined the importance of promoting the sport and the values it embodies internationally.

After spending three years as Her Majesty's Ambassador to Italy, Christopher was quick to point out where his loyalties lie: “I will be supporting Italy in all games - with the exception of one, obviously” he joked.

The Rugby world cup will be the eighth edition of the competition which is held every four years, this year it will be hosted in England Sept. 18 – Oct. 31. The final will be played at Twickenham stadium. 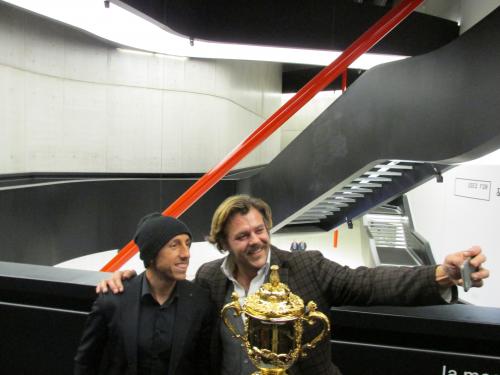