The Paris Killings – A Fatal Trap for Europe 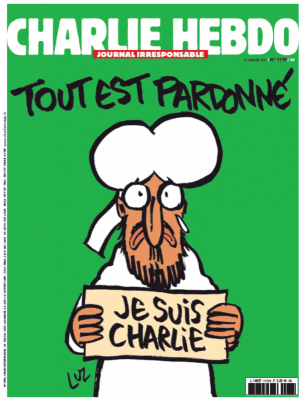 The cover of the latest Charlie Hebdo
ROME, It is sad to see how a continent that was one cradle of civilisation is running blindly into a trap, the trap of a holy war with Islam. Just six Muslim terrorists were sufficient to bring that about.
It is time to get out of the comprehensible “We are All Charlie Hebdo” wave, to look into facts, and to understand that we are playing into the hands of a few extremists, and equating ourselves with them. The radicalisation of the conflict between the West and Islam is going to carry with it terrible consequences

The first fact is that Islam is the second largest religion in the world, with 1.6 billion practitioners, that Muslims are the majority in 49 countries of the world and that they account for 23 percent of humankind. Of these 1.6 billion, only 317 million are Arabs. Nearly two-thirds (62 percent) live in the Asia-Pacific region; in fact, more Muslims live in India and Pakistan (344 million combined). Indonesia alone has 209 million.

A Pew Research Center on the Muslim world also inform us that it is in South Asia that Muslims are more radical in terms of observance and views. In that region, those in favour of severe corporal punishment for criminals are 81 percent, compared with 57 percent in the Middle East and North Africa, while those in favour of executing those who leave Islam are 76 percent in South Asia, compared with 56 percent in the Middle East.
Therefore, it is obvious that it is the history of the Middle East which brings the specificity of the Arabs to the conflict with the West. And here are the main four reasons.
First, all the Arab countries are artificial creations. In May 1916, Monsieur François Georges-Picot for France and Sir Mark Sykes for Britain met and agreed on a secret treaty, with the support of the Russian Empire and the Italian Kingdom, on how to carve up the Ottoman Empire at the end of the First World War.

Thus the Arab countries of today were born as the result of a division by France and Britain with no consideration for ethnic and religious realities or for history. A few of those countries, like Egypt, had an historical identity, but countries like Iraq, Arabia Saudi, Jordan, or even the Arab Emirates, lacked even that. It is worth remembering that the Kurdish issue of 30 million people divided among four countries was created by European powers.

As a consequence, the second reason. The colonial powers installed kings and sheiks in the countries that they created. To run these artificial countries, strong hands were required. So, from the very beginning, there was a total lack of participation of the people, with a political system which was totally out of sync with the process of democracy which was happening in Europe. With European blessing, these countries were frozen in feudal times.

As for the third reason, the European powers never made any investment in industrial development, or real development. The exploitation of petrol was in the hands of foreign companies and only after the end of the Second World War, and the ensuing process of decolonisation, did oil revenues really come into local hands.

When the colonial powers left, the Arab countries had no modern political system, no modern infrastructure, no local management.

Finally, the fourth reason, which is closer to our days. In states which did not provide education and health for their citizens, Muslim piety took on the task of providing what the state was not providing. So large networks of religious schools and hospital were created and, when elections were finally permitted, these became the basis for legitimacy and the vote for Muslim parties.

This is why, just taking the example of two important countries, Islamist parties won in Egypt and Algeria, and how with the acquiescence of the West, military coups were the only resort to stopping them.

This compression of so many decades into a few lines is of course superficial and leaves out many other issues. But this brutally abridged historical process is useful for understanding how anger and frustration is now all over the Middle East, and how this leads to the attraction to the Islamic State (IS) in poor sectors.

We should not forget that this historical background, even if remote for young people, is kept alive by Israel’s domination of the Palestinian people. The blind support of the West, especially of the United States, for Israel is seen by Arabs as a permanent humiliation, and Israel’s continuous expansion of settlements clearly eliminates the possibility of a viable Palestinian State.

The July-August bombing of Gaza, with just some noises of protest from the West but no real action, is for the Arab world clear proof that the intention is to keep Arabs down and seek alliances only with corrupt and delegitimised rulers who should be swept away. And the continuous Western intervention in Lebanon, Syria, Iraq, and the drones bombing everywhere, are widely perceived among the 1.6 billion that the West is historically engaged in keeping Islam down, as the Pew report noted.

We should also remember that Islam has several internal divisions, of which the Sunni-Shiite divide is just the largest. But while in the Arab region at least 40 percent of Sunni do not recognise a Shiite as a fellow Muslim, outside the region this tends to disappear, In Indonesia only 26 percent identify themselves as Sunni, with 56 percent identifying themselves as “just Muslim”.

In the Arab world, only in Iraq and Lebanon, where the two communities lived side by side, does a large majority of Sunni recognise Shiites as fellow Muslims. The fact that Shiites, who account for just 13 percent of Muslims, are the large majority in Iran, and the Sunni the large majority in Saudi Arabia explains the ongoing internal conflict in the region, which is being stirred by the two respective leaders.

Al-Qaeda in Mesopotamia, then run by Abu Musab al-Zarqawi (1966–2006), successfully deployed a policy of polarisation in Iraq, continuing attacks on Shiites and provoking an ethnic cleansing of one million Sunnis from Baghdad. Now IS, the radical caliphate which is challenging the entire Arab world besides the West, is able to attract many Sunnis from Iraq which had suffered so many Shiite reprisals, that they sought the umbrella of the very group that had deliberately provoked the Shiites.

The fact it is that every day hundreds of Arabs die because of the internal conflict, a fate that does not affect the much larger Muslim community.

Now, all terrorist attacks in the West that have happened in Ottawa, in London, and now in Paris, have the same profile: a young man from the country in question, not someone from the Arab region, who was not at all religious during his teenage years, someone who somehow drifted, did not find a job, and was a loner. In nearly all cases, someone who had already had something to do with the judicial system.

Only in the last few years had he become converted to Islam and accepted the calls from IS for killing infidels. He felt that with this he would find a justification to his life, he would become a martyr, a somebody in another world, removed from a life in which there was no real bright future.

The reaction to all this has been a campaign in the West again Islam. The latest number of the New Yorker published a strong article defining Islam not as a religion but as an ideology. In Italy, Matteo Salvini, the leader of the right-wing and anti-immigrant Lega Nord has publicly condemned the Pope for engaging Islam in dialogue, and conservative Italian pundit Giuliano Ferrara declared on TV that ”we are in a Holy War”.

The overall European (and U.S.) reaction has been to denounce the Paris killings as the result of a “deadly ideology”, as President François Hollande called it.
It is certainly a sign of the anti-Muslim tide that German Chancellor Angela Merkel was obliged to take a position against the recent marches in Dresden (Muslim population 2 percent), organised by the populist movement Pegida (the German acronym for “Patriotic Europeans Against the Islamisation of the West”). The marches were basically directed against the 200,000 asylum seekers, most of them from Iraq and Syria, whose primary intention, according to Pegida, was not to escape war.
Studies from all over Europe show that the immense majority of immigrants have successfully integrated with their host economies. United Nations studies also show that Europe, with its demographic decline, requires at least 20 million immigrants by 2050 if it wants to remain viable in welfare practices, and competitive in the world. Yet, what are we getting everywhere?
Xenophobic, right-wing parties in every country of Europe, able to make the Swedish government resign, conditioning the governments of United Kingdom, Denmark and Nederland, and looking poised to win the next elections in France.

It should be added that, while what happened in Paris was of course a heinous crime, and while expression of any opinion is essential for democracy, very few have ever seen Charlie Hebdo and its level of provocation. Especially because in 2008, as Tariq Ramadan pointed out in The Guardian of Jan. 10, Charlie Hebdo fired a cartoonist who had joke about a Jewish link to the French President Nicolas Sarkozy’s son.

Charlie Hebdo was a voice defending the superiority of France and its cultural supremacy in the world, and had a small readership, which it obtained by selling provocation. Exactly the opposite of the view of a world based on respect and cooperation among different cultures and religions.
So now we are all Charlie, as everybody is saying. But to radicalise the clash between the two largest religions of the world is not a minor affair. We should fight terrorism, be it Muslim or not (let us not forget that a Norwegian, Anders Behring Breivik, who wanted to keep his country free of Muslim penetration, killed 91 of his co-citizens).
But we are falling into a deadly trap, and doing exactly what the radical Muslims want: engaging in a holy war against Islam, so that the immense majority of moderate Muslims will be pushed to take up arms.
The fact that European right-wing parties will reap the benefit of this radicalisation goes down very well for the radical Muslims. They dream of a world fight, in which they will make Islam – and not just any Islam, but their interpretation of Sunnism – the sole religion. Instead of a strategy of isolation, we are engaging in a policy of confrontation.
And, apart from September 11 in New York, the losses of life have been miniscule compared with what is going on in the Arab world, where just in one country – Syria – 50,000 people lost their lives last year.
How can we so blindly fall into the trap without realising that we are creating a terrible clash all over the world?
Comment
World