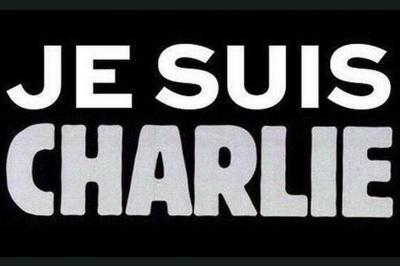 Standard layout of the slogan as found on Charlie Hebdo site

PARIS - Unity is a seductive dream, which in moments like the extraordinary march Sunday when millions stood up for world free speech, we can almost believe possible.

The simple words Je suis Charlie have been truly omnipresent in a manner only possible in today’s world of instant global communication. What began as a twitter hashtag adorns banners in city squares, the words are on the lips of world leaders and Hollywood stars, they are slipped into popular culture in an episode of The Simpsons and for a short moment before the adverts roll they have been on cinema screens across France.

The words and the idea are simple. But, as we know all too well from the catchy slogans of political campaigns, simple phrases often mask ugly and complex truths, haemorrhaging any effort to have a robust and meaningful conversation.

This became apparent to me at dinner with friends, when a political science student broached the idea, should people automatically say Je suis Charlie? Is this attempt to express the grief of a nation an insult to the problems an Islamist terror attack poses in one of the most multicultural countries in Europe?

The French faces around the table were sombre and reluctant to speak, until one eventually said simply, “of course je suis Charlie.” The implication was obvious, this is not up for discussion, some things are too sacred to be debated.

Initially I was inclined to agree, the response to such a horrific attack seemed natural, instinctual. I have no doubt the slogan originated from a heartfelt and honest place. Perhaps no country in the world is so aware of their proud tradition of liberty of expression and political debate as France. Could it be that for once, the simplicity spoke a pure and simple truth?

The problem is that by placing the Je suis Charlie slogan on an emotionally charged pedestal, we negate the very principle for which the journalists and cartoonists of Charlie Hebdo died. That principle is that no ideal or belief is undeserving of criticism and intense examination, no matter the devotion with which it is held by the individual. That is the true freedom of expression, and it demands diversity.

Diversity of opinion and voice. Those who would choose not to identify themselves with the “one-size-fits-all” slogan are not therefore automatically deserving of our scorn, nor are they automatically sympathetic to terrorist extremism. In the highly strung world of politics, the tendency to deal in absolutes, particularly with regards to terrorism, is strong. On Sep 20 2001 George Bush told America and the world that “either you are with us, or you are with the terrorists.”

Over a decade later and after two disastrously unpopular conflicts, the rise of Isis and the continuance of attacks such as those in Paris, citizens of the West increasingly demand an answer to the question, where has the war on terror brought us?

But back to Paris, and that simple, ubiquitous phrase. Many people, whatever their faith, would I believe be united in their condemnation of extremism and their support for free speech, but would simultaneously not wish to sanction the editorial decisions of Charlie Hebdo, nor the more widespread and toxic habit of the Western media to worsen and promote Islamophobia and misconceptions. For an example of which, refer to the CNN News Anchor who, reporting on the Paris attacks, asked his guest speaker, a Muslim and a human rights lawyer, if he supported Isis.

As Roxane Gay points out in an excellent column for The Guardian, our personal freedoms in the West are by no means as universal as we would like to think. It is often too easy to believe in the ideals we hope for, and to deny the ugly truths, the torture, the suppression, which is carried out in our name. The rhetoric of the past week, with the entire of France crying its support for freedom of expression, doesn’t seem to sit well with the law banning the wearing of the burqa in public.

Few would seek to deny that the ramifications of last week’s attack stretch further than “je suis Charlie” alone can express, and endless pages of print have been dedicated to such debate. We as consumers of information need to think critically and acknowledge that the emotive images of a banner, of a march united under three words, is not the whole picture.

In order to heal the wounds of Paris, the public discourse needs to make space for complexity, or else never get near the truth. Because in the politically volatile post-Charlie France, a tense situation can, I fear, only become worse for the country’s Muslim population. Because if you are not Charlie, the banners seem to shout, then you cannot be French.