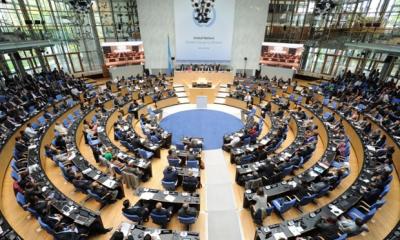 ROME - It is now official: the current inter-governmental system is not able to act in the interest of humankind.

In Lima, 196 countries with several thousand delegates negotiated for two weeks to find a common position on which to convene in Paris in one year’s time. Lima was preceded by an historical meeting between U.S. President Barack Obama and Chinese President Xi Jinping, in which the world’s two main polluters agreed on a course of action to reduce pollution.

Well, Lima has produced a draft climate pact, adopted by everybody, simply because it carries no obligation. It is a kind of global gentlemen’s agreement, where it is supposed that the world is inhabited only by gentlemen, including the energy corporations.

This is an act of colossal irresponsibility where, for the sake of an agreement, not one solution has been found. The “big idea” is to leave to every country the task of deciding its own cuts in pollution according to its own criteria.

And everybody is aware that this is most certainly a disaster for the planet. “It is a breakthrough, because it gives meaning to the idea that every country will make cuts,” said Yvo de Boer, the Dutch diplomat who is the former Executive Secretary of the United Nations Convention on Climate Change (UNFCCC). ”But the great hopes for the process are also gone.”

To make things clear, all delegates knew that without some binding treaty to reduce emissions, there is no way that this will happen. But they accepted what is possible, even if it does not solve the problem. It is like a hospital where the key surgeon announces that the good news is that the patient will remain paralysed.

The agreement is based on the idea that every country will publicly commit itself to adopting its own plan for reducing emissions, based on criteria established by national governments on the basis of their domestic politics – not on what scientists have been indicating as absolutely necessary.

This, of course, is the kind of treaty that no country in the world objects to. The real value of the treaty is not the issue. The issue is that the inter-governmental system is able to declare unity and common engagement. The interests of humankind are not part of the equation. Humankind is supposed to be parcelled among 196 countries, and so is the planet.

This act of irresponsibility is clear when you look at all the countries producing energy, like Saudi Arabia or Venezuela, Iran or Ecuador, Nigeria or Qatar, whose governments are interested in using oil exports to keep themselves in the saddle. And take a look at what the world’s third largest polluter, India, is doing in the spirit of the Lima treaty.

Under the motto: “We like clean India, but give us jobs”, the government under Prime Minister Narendra Modi is moving with remarkable speed to eliminate any regulatory burden for industry, mining, power projects, the armed forces, and so on.

According to the high-level committee assigned to rewrite India’s environmental law system, the country’s regulatory system ”served only the purpose of a venal administration”. So, what did it suggest? It presented a new paradigm: ”the concept of utmost good faith”, under which business owners themselves will monitor the pollution generated by their projects, and they will monitor their own compliance!

The newly-appointed Indian National Board for Wildlife, which is responsible for protected areas, cleared 140 pending projects in just two days; small coal mines have a one-time permission to expand without any hearing; and there is no longer any need for the approval of tribal villages for forest projects.

Environment Minister Prakash Javadekar boasted: “We have decided to decentralise decision making. 90 percent of the files won’t come to me anymore”. He also said that he was not phasing out important environmental protections, just “those which, in the name of caring for nature, were stopping progress.” He also plans to devolve power to state regulators, which environmental expert say is akin to relinquishing any national integrated policy.

It is, of course, totally coincidental that the Lima conference took place in the middle of the greatest decrease in oil prices in five years. The price of a barrel of oil is now hovering around the 60 dollar mark, down from over 100 two years ago. This price level has basically been decided by Saudi Arabia, who did not agree to cut production to increase the cost of a barrel.

The most espoused explanation was that the low cost would undercut schist gas exploitation which is making the United States energy self-sufficient again, and soon an exporter. But this will equally undercut renewable energies, like wind or solar power, which have higher costs and will be abandoned when cheap oil is available.

Again coincidentally, this is creating very serious problems for countries like Russia and Venezuela (U.S. irritants) and Iran (a direct enemy), which are now entering into serious deficit and political problems. And, again coincidentally, this is making use of fossil energy more tempting at a moment in which the world was finally accepting that there is a climate change problem.

In March, countries will have to present their national plans and it will then become clear that governments are lacking on the very simple task of arresting climate change, and this will lead us to irreversible damage by our climate’s final deadline, which was identified as 2020.

Thus the exercise of irresponsibility in Lima will also become an exercise in futility.

Is there any doubt that if the people, and not governments, were responsible for saving the planet, their answer would have been swifter and more efficient?

Young people, all over the world, have very different priorities from corporations and industry … but they also have much less political clout.