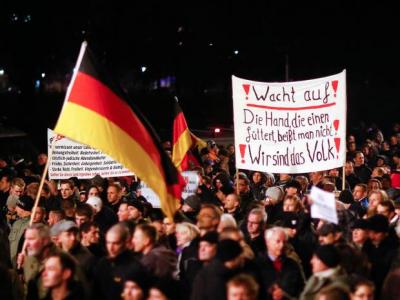 ROME - The Swedish Social Democrat government, which took office only two months ago, has just resigned.

The far-right anti-immigrant Sweden Democrats sided with the four-party centre-right opposition alliance, and new elections will be held in March next year.

In Europe, Sweden has been the symbol of civic-mindedness and democracy – the place where those escaping dictatorship and hunger could find refuge; the country without corruption, where social justice was a national value.

However, in just a short period, the Sweden Democrat xenophobic party, which wants to close the country to foreigners and is now the third-largest party in parliament, was able to topple the government on Dec. 3.

Similar parties exist in the other Nordic countries – Finland, Norway and Denmark – where they have been similarly able to take a decisive role in national politics. The myth of northern Europe, the modern and progressive Nordic Europe, has vanished.

A few days later, in Dresden (the Florence of Germany) in Saxony, thousands of demonstrators marched to the cry ”Wir sind das Volk” [“We are the people”] – the same battle cry used in protests against the Communist regime in then East Germany 25 years ago, only this time the protest was against immigrants.

A previously unknown activist, 41-year-old Lutz Bachmann, has set up the Patriotic Europeans Against the Islamisation of the West, and in seven weeks has been able to rally thousands of people. The local paper, the Sachsische Zeitung, has reported that Bachman has several criminal convictions for burglary, dealing with cocaine and driving without a licence or while drunk.

Such details were irrelevant to the demonstrators. They “miss their country”, demand “protection of the Homeland” and applaud Bachmann’s call for a “clean and pure Germany”.

In Saxony, foreign immigrants account for only two percent of the population, and only a small fraction of those are Muslim. But the announcement that facilities would be opened for some 2,000 refugees from Syria, was the trigger in this town of 530,000 inhabitants. In the last state legislative elections, a new populist party, the Alternative for Germany, took almost 10 percent of the vote.

A similar irrational fear is gripping many European countries.

Italy, for example, now has two major parties (the Northern League and the Five Star Movement), which together account for around 35 percent of the vote, with xenophobic tones, and another major party, Forza Italia (literally Forward Italy) led by former Prime Minister Silvio Berlusconi, is flirting with an anti-European policy. The three more or less openly advocate withdrawal from the Euro.

At the same time, in 2013, only 514,308 children were born (including those of immigrants), 20,000 less than the year before. Between 2001 and 2011, according to ISTAT, the national statistical institute, the number of families formed by one person increased by 41.3 percent, while those with children fell by five percent. Of those with children, 47.5 percent had one child, 41.9 percent two and only 10.6 percent three or more.

If, as is conventionally held, the demographic replacement rate is 2.1, this means that the Italian population, like everywhere in Europe, is on a steep decline.

Of course, having a child today is not an easy choice. To putit simply: in 2009, Italy had a budget of 2.5 billion euro for social interventions and, four years later, only one-third of that; in 2009, Italy’s Family Policies Fund stood at 186.5 million euro and is now less than 21 million. No wonder then that 60 percent of the population lives in fear of becoming poor.

The number of NEET (Not in Education, Employment or Training) rose from 1.8 million in 2007 to 2.5 million in 2013. And while Italy’s young people are being humiliated, its senior citizens are being mistreated – 41.3 percent of pensions are less than 1,000 euro per month.

By the way, 83,000 Italians expatriated in 2013, and the number of young people with a university degree that went to the United Kingdom, for example, was just over 3,000 – but in the same year, 44,000 foreigners also left Italy and while Italy received nearly 355,000 immigrants in 2011, two years later the number was just 280,000. And yet the campaign of xenophobia in Italy has it that there is a
dramatic increase in immigrants.

This social decline is happening at different speeds and in different proportions all over Europe. In Germany, the core country, 25 percent of the population fall into the so-called “Hartz IV” category – under the Hartz Committee reform of the German labour market introduced by then Chancellor Gerhard Schroeder – and have to survive on the bare minimum of benefits.

This social decline is being accompanied by an unprecedented increase in social inequality. Two French economists, François Bourguignon and Christian Morrisson, published a study In 2002 on inequality among world citizens, starting from the 19th century, using the Gini index of inequality (where absolute equality = 0). In 1820, the index stood at 50, had risen to 60 in 1910, 64 in 1950, 66 in 1992 and 70 ten years later.

Today the ratio between a minimum wage and a top salary isvery simple – the small guy must work 80 years to earn what the big guy earns in a year!

According to a number of sociologists, ‘catching up’ (or the so-called ‘demonstration effect’), is one underlying reason for corruption. It is no accident that the south of Europe has much more corruption than the north (but the Protestant Ethic must also play a role).

In just a few months, the former prime minister of Portugal, José Socrates, has been jailed, former president Nicolas Sarkozy has returned to politics in France to try to escape several accusations and Spaniards are riveted by the revelation of giant webs of corruption that the government is now trying to stymie by changing the judge in charge of the prosecution

Meanwhile, Romans have awakened to find out that a criminal organisation has been controlling the town council and the administration, and this coming on the heels of a similar discovery in Milan, where individuals who had been already convicted of corruption got back into business and did more of the same in the public works for next year’s Expo.

It is no wonder that, as in every crisis, in a climate fear and uncertainty, there is a need for a scapegoat. The fact that without immigrants Europe would grind to a halt and be unable to compete internationally is not matter for a campaign that appeals to politicians. On the contrary, they are flying the flag of defending Europe from a dangerous influx of immigrants.

This all shows that Europe has lost its compass – and there is nothing on the horizon indicating that it can be recovered soon.

Who is going to provide an answer to Europe’s anguish when those in power escape from reality and look for scapegoats?