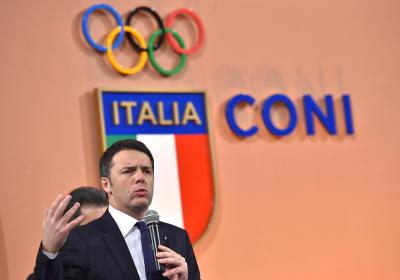 Speaking at the headquarters of the Italian Olympic Committee (CONI) Monday, Renzi promised that the Italian bid would aim “to win” and argued that “Italy has all the conditions to host the games.”

The city’s previous bid to host the 2020 games was withdrawn during the first stage, when then Prime Minister Mario Monti said that in the midst of a bleak recession the country could not afford the astronomical costs. Critics may well be questioning whether much has changed since then, following Renzi’s announcement on Monday.

The 2020 games were eventually awarded to Tokyo.

Renzi was dismissive of financial worries in his speech, vowing that “if there are problems, we need to confront and resolve them, without allowing them to stop us from dreaming.” He further claimed that Italians have been prone to despondency in the face of economic decline, saying “the country could shrink away, which is what those who are against the Olympics want when they tell us to give up,” but the task “of our country is to build new bridges, to go back to believing that we can achieve big things.”

Working in Rome’s favour are the sporting facilities already in place in the city, which would reduce the amount of construction work needed in the event of a successful bid. However political rivals have already attacked Renzi’s announcement, with secretary of the far-right Northern League Party Matteo Salvini labelling the idea of Rome 2024 “crazy”, he also pointed to the outstanding “Mafia Capitale” investigation into corruption in the capital.

The city hosted the games in 1960, when Nino Benvenuti won the Boxing Welterweight gold medal. He told Ansa on Tuesday, “I’m happy with the decision to put ourselves forward because hosting the Olympics is one of the greatest moments for a country and not just from a sporting point of view.” He added, “the fact that we have already organised a games, even though it was a long time ago, is an advantage and guarantees that we would be able to deliver a top performance.”

It will be a long wait to discover the fate of Rome’s bid, after a preliminary round of selections next year the final decision won’t be announced until 2017. Rome is so far the only city to officially announce its candidacy, however it is anticipated that both Germany and the U.S will put themselves forward, the U.S are reportedly still considering several cities whilst Germany will most likely choose either Berlin or Hamburg.