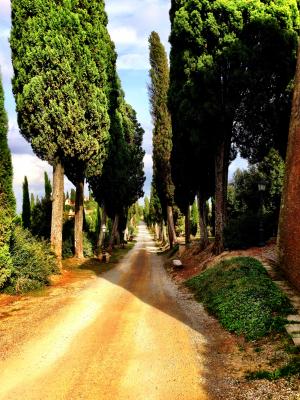 SIENA - "It's right back there," the guide is pointing through a pane of glass behind a side altar in the Basilica Cateriniana di San Domenico in Siena.

Tourists jostle against us to get a better view and I crane my neck to try and see through the glass, through the metal bars and into the ornate reliquary to get a glimpse of the mummified, dismembered head of St. Catherine.

The head, though small and withered after nearly 750 years is in remarkable shape and it's a simultaneously bizarre and moving experience to be able to look on the face of the 14th century saint said to be responsible for bringing the papacy back from Avignon to Rome. Don't miss the Saint's dainty thumb, displayed to the right of the altar.

Unexpected surprises like this are tucked into every corner of Italy's popular Tuscan region. Tuscany is world renowned for its art, history, wine, food, and picture-perfect landscapes of red poppies, vineyards, and sentinel-like Cyprus trees that line winding sandy paths up to villas and monasteries. No trip or extended stay in Italy should overlook such a region as bountiful in culture and tradition as Toscana. Travelers who just stop in Florence often miss the small towns that give the area its authentic, rustic charm.

Chianciano Termeis located in the southern-most part of Tuscany and is the ideal place to relax and restore your health before you begin your Tuscan adventure. Known for its Thermal parks and Wellness centres, the curative powers of the waters here were well-known in Roman times and are now the town's main attraction.

On the misty autumn morning that we arrive, the town looked like a cold steam room with mist hovering low over the buildings. Lamp posts, rubbish bins, and even a vintage BMW bug are suited up in pink crochet blankets as if to keep out the chill, although they are really part of a breast-cancer awareness campaign. Outside, everything is quiet in the mist with just a few old men sharing a coffee in the square and clients of the Cafe Continental enjoying home-made gelato.

It seems like a sleepy town, perfect for winding down from fast-paced city life and reacquainting yourself with the pleasure and restorative powers of steam, heat, and mineral waters. Stay in the Grand Hotel Terme, complete with its own spa center which offers massages, facials, and numerous saunas, each designed to cure ailments from muscle pain to congestion.

With our systems cleansed and invigorated it's on to Montepulciano, the classically charming Medieval and Renaissance hill town to enjoy some of the best food (and wine) in Tuscany. Famous for its pork, cheese, lentils, honey, and traditional "pici" pasta which is like a thick hand-rolled spaghetti, the bold and simple flavours of the Tuscan menu are paired with one of Italy's most famous wines: Vino Nobile di Montepulciano.

After peeking into the Duomo of Montepulciano and cruising the street market of Piazza Grande for antiques, we hasten our way to one of the oldest and most beautiful wine cellars in the world: the Cantina de Ricci located, appropriately enough, on Strada da Vino Nobile. After descending down a wide equestrian stairway we find ourselves in the cellar where one of the region's most treasured products is preserved: its wine. Massive oak barrels loom over our heads in a succession of cave-like cellars with vaulted ceilings all built over an Etruscan tomb. I wish we had time to enjoy the light lunch and wine tasting they offered!

Stay in the charming Villa San Bartolomeo which offers eight rooms, each with their own kitchen, a pool, and a view over the rolling hills and Montepulciano itself.

The next day we briefly leave the Siena region of Tuscany for Cortona in Arezzo which, for those of you outside of Italy, was featured in the film Under the Tuscan Sun, starring Diane Lane. You can still see posters displayed in shops for the 2003 film about an American woman who leaves behind an unsatisfying life in the states to restore a villa outside Cortona and in the process falls in love with the romantic and sensual pleasures of Italy. Does the film perpetuate a popular and cliché view of Italy? Definitely. Walking through the streets of Cortona on a crisp, sunny day, looking up at the bell tower and watching a group of children play with a small terrier, do we mind? Not really.

We visit the Etruscan Academy Museum for a well-displayed and fascinating collection of valuable finds from Etruscan burial sites that piece together what life and death on the Italian peninsula must have been like over two millennia ago. A peaceful people who valued art, culture, and equality between the sexes, the Etruscans produced crafts that are at times exquisite, playful, and inventive. The museum also contains the incredible tabula cortonensis, a contract drafted on bronze plate during the Hellenistic age that is the third longest Etruscan text in existence.

Stay in the Cortona Resort & Spa, a luxury resort whose restaurant "La Corte" is superb.

And so, at the end of a long weekend, we find ourselves in Siena contemplating the face of St. Catherine who lived over a thousand years after the Etruscans settled the area and almost a thousand years before now when thousands of visitors a year flock to Siena.

After the much smaller towns and rolling countryside, Siena feels like a bustling city whose winding medieval streets and traditional "contrade" or districts take us back in time while its modern glass-fronted shops snap us back into the present. A visit to the black and white striped Romanesque-Gothic Cathedral of Santa Maria Assunta, the richly frescoed Piccolomini Library, views from the Torre del Mangia, and the dish-shaped Piazza del Campo, site for the historic horse-race, the Palio, are the crowning glory on a lovely long weekend in Tuscany.

Stay in Castello di Leonina Relais. A 13th century fortress and once the home of the powerful Chigi family, it was used as a summer residence by Cardinal Fabio Chigi who later became Pope Alexander VII. Now it's a warm and inviting hotel, one part rustic charm and one part luxurious elegance. 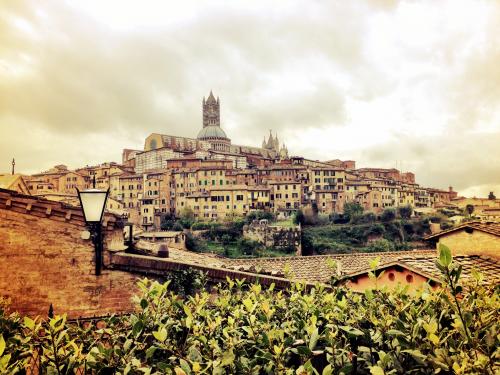 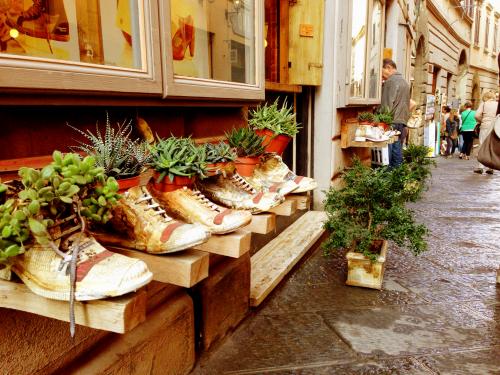