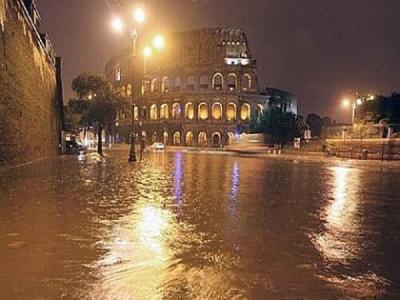 ROME – “The worst is yet to come” warns Roman mayor Ignazio Marino as the city remains on red-alert for further flooding.

Metro stations and schools were closed in the capital on Thursday after heavy overnight rainfall.

Eight Italian regions are currently on weather re-alerts, as hail and thunderstorms hit Rome late in the afternoon. Schools were due to reopen on Friday morning when the alert level is downgraded to orange.

Of the four metro stations on Line A which had been closed Thursday morning, three were reopened by the afternoon. All archaeological sites in the city have been closed as a precaution, including the Colosseum and Forum.

On Wednesday night an ATR jetliner made an emergency landing at Fiumicino airport after being struck by lightning. No one was injured in the incident.

High winds have brought down trees in the city and to a larger extent at the coast at Ostia.

The official response to the flood warnings may appear over-cautious but it comes after previous cases of public criticism due to perceived inaction by the city council. In 2011 the city fell victim to severe flooding which killed one person.

Transport company Atac announced that they were closely surveying the weather situation and would respond quickly to any change of circumstances.