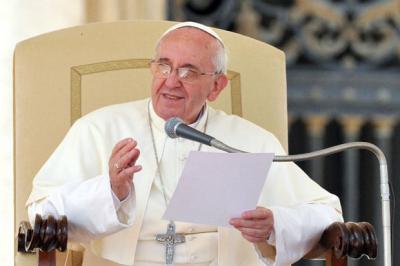 VATICAN CITY – Pope Francis used his General Audience on Wednesday morning to call for the international community to use “all force necessary” to tackle Ebola.

The pontiff’s speech came one day after he defended himself against allegations of left-wing political leanings. He spoke at a meeting on the economy and globalisation on Tuesday, saying, “They call me communist but love of the poor is at the centre of the gospel.”

He went on, “let us say together with all our heart: no family without a roof, no farmer without land, no worker without rights, and no person without the dignity of work!”

The pope normally refrains from publicly commenting on criticism levelled at him, making this statement somewhat unusual.

The address on Wednesday, meanwhile, drew upon similar themes. Francis referred to those suffering from Ebola as “our sick brothers and sisters,” he also invited those assembled to pray for them and for those who had lost their lives. He said, “I renew my appeal to the international community to put in action every necessary force to destroy this virus.”

According to figures the World Health Organisation released at the weekend the Ebola outbreak has so far killed around 5,000 people. Scientists have warned that the real figure may in fact be significantly higher as health infrastructures have been overwhelmed in the affected countries, compromising officials’ abilities to track cases.

The pope’s leadership style and doctrine have been under the microscope in recent weeks following the Extraordinary Synod on the Family’s vote to tone down liberal language supporting homosexuals and divorcées in its final report.

Senior U.S Cardinal Raymond Burke was forced to defend himself this week after he was allegedly misquoted in an interview regarding the synod. He claimed that Buzzfeed News arranged direct quotes in a certain way to imply that he criticised Francis’s leadership of the church.

Cardinal Burke said, “I did not state that Pope Francis has harmed the Church. Rather, I was perfectly clear that it was a lack of clarity about where the Holy Father stands on issues related to marriage and Holy Communion that had caused the harm.”

The synod will reconvene in a year’s time to once again consider the same issues.