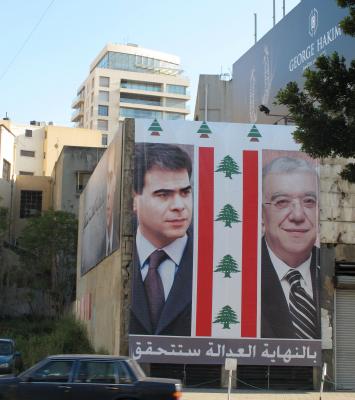 BEIRUT — In a country where Italy currently sends its second largest contingent of peacekeeping troops as part of the UNIFIL mission, martyrs line the streets, statues and posters of those meeting a violent end in recent history.

The well-dressed young man or the bespectacled, avuncular one in a suit and tie on enormous posters are neither running for office nor holders of current government positions. Pierre Amine Gemayal and Antoine Ghanem, both prominent anti-Syrian figures and members of the Phalangist party whose headquarters mark the beginning of East Beirut, were instead targeted by political assassinations, in 2006 and 2007.
Iran-backed Muslim-fundamentalist Hezbollah, much maligned and held to be a terrorist group by the West, might be thought loath to ally itself with a Christian group under a general exiled to France for some 15 years until 2005 for declaring war on the Syrian occupation. However, the Free Patriotic Movement (FPM) led by Christian Maronite General Michel Aoun is a part of Hezbollah-led March 8 Alliance. An alliance also including Amal, the Shia party to which the current prime minister designate Najib Mikati, a personal friend of Syria leader Bashar Al-Assad, belongs.

A member of Michel Aoun’s inner circle who spent many years in exile in France with him, but who classifies himself as a sympathiser and not a party member, tried to explain the reasons for the ‘General’s’ present alliance with Hezbollah. Being involved in the world of finance, his talk centred on the widespread corruption impoverishing the nation and the vast amounts of money he claimed had been siphoned off by the Hariri family (Sunni, part of the March 14 Alliance), including funds granted by Saudi Arabia for the rebuilding of infrastructure in the country after the devastation wrought by the 2006 Israeli invasion, whereas Hezbollah had ended up footing ‘’between 70 and 80% of the bill’’. ‘’You can trust them,’’ he said. ‘’There have even been surveys in Israel showing that when Nasrallah (Hezbollah leader) says something, Israelis believe that he will do what he says.’’

A Lebanese Sorbonne-educated university professor of Geopolitics, Contemporary Middle Eastern History and Information and Public Opinion, faculty chair and the editor of a FPM-backed newspaper offered me some of his views on Lebanon’s recent history as well. Believing at a personal level that it might be a good thing were the Syrian regime to come toppling down if this led to greater democracy and freedom of the expression, having throughout his career as a journalist been under tight strictures as to what he could and could not say, he nonetheless stressed that Lebanon should not be seen as interfering in its neighbouring country in any way for its own safety. He spoke about his personal circumstances and about his brother, who was killed while working in Iraq by Al Qaeda, leaving behind three children and an Iraqi wife who the professor is supporting by working long hours in his three different professional roles.

His reaction was almost violent, however, when asked what he thought should be done about the Palestinian refugees in the country. Though believing a two-state solution should be worked out allowing them be absorbed into either the West Bank or Gaza, if this were not to come into being, then ’Arabs’ should be the ones to take on the burden, not the Lebanese. And, should the Palestinians instead want to stay in Lebanon, ‘’they should be thrown into the sea.’’
As protests rage across the border in Syria, Lebanon is forced to play a delicate balancing act with its 18 state-recognised religious communities and its government based on a delicate, complex confessional basis in which every major government post is set aside for a specific religious group: a Sunni prime minister, a Maronite Christian president, a Shia parliamentary speaker, etc. Since government positions and roles were shared out according to the percentage of members of each religious community within the country at the time of the 1932 census, the government has refused to conduct any sort of official head count out of a fear of upsetting the balance. A fear which is also the oft-stated justification for refusing to grant citizenship to the approximately 400,000 Palestinians (mostly Sunni) in the country’s refugee camps, many of whom haven grown up and had their own families within them.

As for illustrating closeness of ties with its neighbour, it is said that Syrians who cross the border into Lebanon do not go to hotels but stay with family members or close friends. That when the Lebanese cannot afford the country’s fast rising prices, they go for the day to Syria and stock up on whatever it is they need, taking advantage of Syria’s lower ones. And I am reminded at varying intervals but with remarkable insistency from those in the pro-Syrian camp that the Lebanon and Syria were once a single entity, and that Western powers were the ones to draw artificial boundaries to each.

A former university professor in political science involved in the opposite end of the political spectrum, the March 14 Alliance, told me that Aoun was ‘’playing the minority card’’ in raising the spectre that should Assad’s regime go down, not only would the ruling Alawite (Shia) minority in Syria undergo persecution at the hands of the Sunni majority but also the Christians in Lebanon would suffer. That scare-mongering was the tactic used by those leading the March 8 Alliance. Of Christian origins as well - but Greek Orthodox instead of Maronite - the professor had only switched to March 14 after many years of supporting Aoun and the FPM, after the General brought in the alliance with Hezbollah and ‘’showed an utter lack of principles, acting solely out of tactical interests. Look, the man was originally the staunchest opponent to Syrian occupation and interference in the country, and now he’s supporting the group in Lebanon created by Syria?’’.

At a recent meeting at the March 14 Coalition Secretariat, talk centred on how to react to the ongoing protests in Syria. A number of people from a wide range of  religious and cultural backgrounds meet there on a near-daily basis to brainstorm ideas, exchange views or discuss a specific issue, such as the one I was invited to sit in on. A petition had recently been signed by 135 intellectuals and political activists expressing solidarity with the Syrian people, condemning the regime’s violence and calling on the Arab league to intervene, though getting newspapers to publish it had been an uphill battle, only eventually getting it published in L’Orient Le Jour due to one of journalists being a signatory, and the day after in An-Nahar.
Debate during the meeting was lively but respectful, with a number of Lebanese journalists in attendance alongside a film director, a doctor, and Samir Franjieh, a former member of parliament and high profile intellectual.
Catching only a few phrases in Arabic, key points of the discussion were kindly translated to me by Saad Kiwan, a journalist who worked for some 15 years in Italy and who is now the director of Samir Kassir’s Eyes,www.skeyes.org,  a website set up in 2006 dedicated to drawing attention to violations of freedom of the press across a number of countries in the Middle East and named in honour of the Lebanese journalist assassinated in a car bombing in 2005, a lit-up statue of whom sits next to the  tall glass-fronted offices of the daily An-Nahar for whom he worked downtown just opposite the former Green Line from the Phalangist headquarters.

A number of initiatives within the public and cultural spheres attempt to get past the destruction and destructiveness interwoven into the past few decades of the country’s history, to go forward beyond just at an economic level. I was invited to attend the Beirut International Platform of Dance (BIPOD), which  ran April 15 through April 30, and one, ‘’On the Lips Snow’’, impressed me with its sustained tension throughout, seemingly an attempt at exorcising and coming to terms with what the country has experienced and continues to experience.
The experimental dance performance starts out focusing on a sinewy bearded young man resembling a fighter to one side and his young, slim blond companion, initially confined to a chair set before a table, alone, and periodically giving a slight push to the table top hanging from the ceiling below a low-hanging chandelier in centre stage, her barely restrained anger at being made to wait passively visible, while another woman was suspended in a net from which she was trying desperately to escape to the right of the stage. Following the performance, the protagonist spoke with me a bit on her PhD project, a comparative study on how female Palestinian and Lebanese authors deal with the violence.

Meanwhile, collective initiatives by the population to move forward without just forgetting the past meet with varying degrees of success. Many posters of the Haqiqa (‘’Truth’’) movement can be seen pasted up on walls around the central area of Hamra showing the black outline of a body with line running down the middle against a white background. When asked, a group of Lebanese university students said the poster was ‘’rather confusing. There is one movement demanding that we be given the truth about those who disappeared in the civil war’’, numbering 17,000 according to an Amnesty International report released last month, and ‘’another concerning the International Tribunal for the killing of Rafiq Hariri’’, the anti-Syrian former prime minister killed along the sea front when 1,000 kilos of TNT were detonated as his motorcade went past on February 14, 2005, argument over which caused the government to fall in January of this year.
The government is still waiting to be formed, and most analysts say that it is unlikely to be so until some degree of calm is restored in the country just across the border. Meanwhile, Italy is planning a progressive withdrawal from the south of the country, where it is the largest troop contributor. It remains to be seen if such optimism in Rome is well-placed. 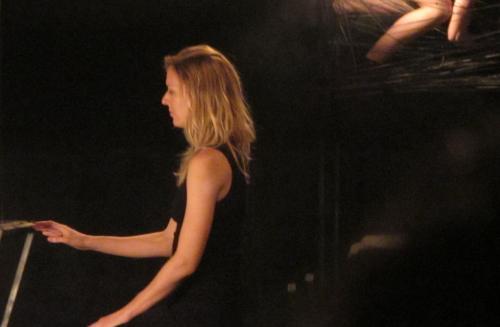 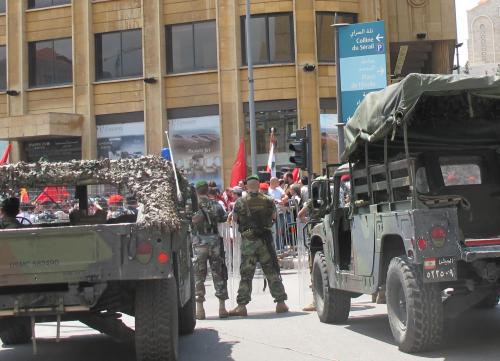