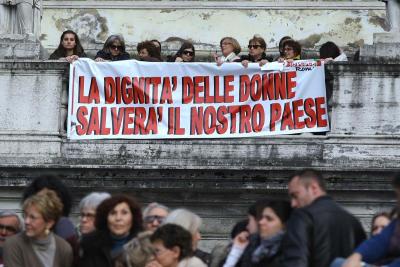 ROME – The World Economic Forum report for 2014 found that Italy is still lagging behind other European countries in terms of female empowerment.

The ninth edition of the Gender Gap Report, published on Tuesday, analysed data for 142 countries, with Italy making a marginal improvement by moving up two points from the 2013 results.

Top of the list unsurprisingly was Scandinavia, with Iceland, Finland, Norway, Sweden and Denmark forming the top five.

The economic powerhouses of the European Union, Germany, France and the U.K, also polled significantly higher than Italy, all featuring in the top 30.

The report focuses upon female to male ratios in the key sectors of employment, education, politics and health.

As Italy struggles to weather a difficult economic recovery, the WEF warns that, “a nation’s competitiveness in the long term depends significantly on whether and how it educates and utilises its women.”

Despite the report uncovering encouraging data on female participation in Education, with female undergraduate students outnumbering their male counterparts, the gender pay gap is still a significant issue. Italy ranked in lowly 129th place for wage equality for similar work.

Political representation was also highlighted as an issue, with around 30 percent of parliamentarians and ministers being female, and not a single female head of state in the last 50 years.

Perhaps some of the most revealing data included in this report is the imbalance which still exists in Italy when it comes to household tasks. Women, it was revealed, do an average of 315 minutes of unpaid work every day, whereas men do only 104 minutes.

Traditional views on the division of household and parenting tasks are seemingly still prevalent in Italy. Until these deep-rooted habits begin to change, the country stands little chance of making significant advances in line with our European neighbours.