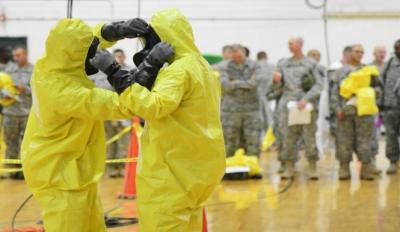 ROME – A decision to quarantine about a dozen American soldiers for Ebola screenings in Vicenza has outraged local authorities and fueled popular near-psychosis.

The dozen or so soldiers are the first U.S. military personnel to leave Liberia since the onset of the Ebola crisis, and although none of them are showing any signs of exposure to Ebola, they are to remain in a controlled military quarantine within Italy for 21 days as a precautionary measure.

“They shouldn’t have been sent here, they should do their quarantine for Ebola at home. It would have been more respectful if they thought about the risks posed to local citizens.” said the President of the Veneto regional government and former Minister of Agriculture Luca Zaia on Wednesday.

Mr. Zaia is one among many Italian politicians to voice concern over the quarantine. Representatives of the anti establishment 5-Star movement demanded that “The government must send all U.S. soldiers back to Washington.” shortly following the announcement that the troops would be stationed in Italy.

According to several reports there has been a sharp increase in the amount of health related emergency calls in the Vicenza region since the arrival of the U.S. troops from West Africa, further emphasizing the public’s fear of Ebola infected people entering the region.

The American and Italian governments have stated several times that the roughly 12 troops in quarantine are showing absolutely no signs of having come into contact with Ebola, and that the quarantine is just a precautionary measure to minimize the risk of spreading the deadly virus.

Unsurprisingly, simply reassuring locals that no troops are “currently” showing signs of Ebola has done little to ease anxiety around the matter. The fact that all of the troops have come directly from Western Africa, ground zero for the Ebola outbreak, is also a primary cause of concern.

All of the troops are currently spending their isolation period in the infectious disease ward of the San Bortolo hospital, with another 35 American troops expected to come through the hospital from Western Africa for a similar quarantine period this week.

The hospital, which employs hundreds of people and houses thousands of patients, has caused further fear among Italians that it could become a breeding ground for the virus. Government and hospital officials have fervently dismissed these fears, citing their exceptional safety standards when dealing with all infectious virus’s, the fact that all in quarantine will only be exposed to essential personnel, and that Ebola is relatively easy to contain, as it is only spread through direct contact with the body fluids of someone showing symptoms of the disease.

The severity of the current Ebola epidemic, which has claimed some 5000 lives, makes it unsurprising that residents of Vicenza, or anywhere for that matter, would be weary to have those who could have been potentially exposed to the virus being placed on their doorstep.

The dismay among the locals at the situation is likely a result of the inherent nature of a quarantine, which intrinsically suggests that there is the possibility of some sort of outbreak. With this in mind, it seems unlikely that it will be possible to pacify any local fears as long as the region is being used as an isolation center for those coming from Ebola afflicted regions.