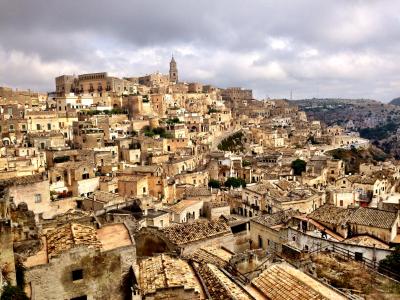 Matera's sassi, or caves, have been built up over centuries

MATERA - Naming Matera European Culture Capital 2019  breathes new life into the ancient cave city. The plain overlooking the southern town is a windswept limestone plateau that at first glance offers a lonesome vista of pale stone, gravel, and scrub brush. Our destination, La Gravina, is the largest of the many ravines cutting through the landscape.

Beneath our feet, hidden in caves and tucked into craggy cliff sides, are ancient water cisterns, wells, stables, and even churches where herdsmen from the Bronze Age to the Byzantine stopped to replenish their livestock and their souls.

The air is dry and the wind and sun alternately chill and bake our skin as we walk along a winding cement road through the ancient landscape past a long line of Biblical figures: men, women, children, and animals – actors on the set of the film Christ the Lord, to be released in 2016. They shuffle past in long woolen robes onto their bus – it's lunch time – while one man in a tunic leads an enormous horned white ox past the film crew shouting at us to move aside for a line of vans.

We pass the set and come to the overlook which has inspired numerous directors to shoot their films here in this seemingly obscure location in Southern Italy's Basilicata region. Among them, Mel Gibson's Passion of the Christ and Pier Paolo Pasolini's The Gospel According to St. Matthew have used Matera's distinctive sassi, or cave dwellings, to represent ancient Jerusalem.

The town itself is a jumble of square blocks, church towers, scaffolding and cranes with enough archways and stairways to resemble an Escher lithograph: every time you try to follow a pathway with your eyes you lose your place and what looked like a road becomes the roof of a house, or an archway doubles as a bridge, all clustered above La Gravina, facing the kind of sheer cliff that the town itself used to resemble over 10,000 years ago.

Humans have been living in the small labyrinth of Matera longer than almost any other location in the world. Matera's sassi have been almost continuously inhabited since they were carved out of the tuff stone cliffs by Paleolithic man 10,000 years ago. Over the centuries, settlers carved blocks of stone from the surrounding rock quarries to build up houses on top of the man-made caves creating a rabbit warren of hollow spaces and protruding angular blocks piled one on top of the other.

The only buildings in Matera that could not be built over were the churches. The congregation's connection to the Lord above could not be obstructed by any regular shop or house and, consequently, all the flat space in Matera marks church rooftops. This, however, didn't mean they were left unused. Cemeteries were allowed in these spaces, creating the eerie effect of having a church's dead congregation residing above its living one.

Later in the day, back on the other side of the ravine, we visit one of these churches, now dressed up as a set for Christ the Lord and festooned with caution tape. The cave Church of Santa Lucia alle Malve once housed Benedictine monks in the Middle Ages and went through various religious transformations from which we can still see 12th and 17th century frescoes of saints to this day. Later on, as a wool factory, the walls became peppered with holes from the whirring spools that spun the wool into yarn. Then, it was simply a home with a kitchen in front and space for the animals in back. Now, after being abandoned for decades, it is a museum for tourists, the preservation of hundreds of years of memories.

The church was abandoned like every other dwelling from the 1950s to 1990's when Matera dwindled to a ghost town. Southern Italy was rife with poverty and Matera was one of the contenders for greatest national embarrassment. As Europe emerged from the shock of World War II, Italy began to experience the period known as the "economic miracle" which was to last nearly two decades. Millions would migrate north to the industry-driven area between Milan, Turin, and Genoa and the country experienced a rate of economic growth that it has never since replicated.

Despite this economic success, large swathes of the south remained incredibly poor and disconnected from the rest of the country. In 1945 Carlo Levi published his memoir Christ stopped at Eboli, detailing the appalling living conditions in remote towns in the Basilicata region. The existence of towns like Levi described and Matera, where people were living in Neolithic caves without either a sewage system or running water and alongside their livestock, did nothing for the national image. The Italian government felt pressure to set an example of change and progress and solidify an image of a successful post-war southern Italy.

In 1954, with one industrious gesture of regulation and reparation, 4,000 people living in central Matera were evacuated into nine newly constructed neighborhoods nearby. Even noble families who inhabited spacious palazzi were forced to leave and walls were set up in the streets to prevent anyone's permanent return. By the '80's nobody remained in the old town, left silent for the first time in millennia

The new neighborhoods are where most Materani live today but the apartments have all the character of mass-packaged living: every house with its terrace-full of laundry, expressionless rectangular windows overlooking rows of gray and beige adequacy. The walls that were meant to keep people from moving back into the caves were easily scaled by children who played in the empty streets amidst lonely houses and rubble.

In the '90's the government re-opened the town for development and people started returning to Matera, slowly filling in the holes in the walls, repaving roads, sealing the roofs over to keep out the rain that nurtures the acres of green wheat fields surrounding the town on the opposite side of La Gravina.

Now Matera has gone from "the shame of Italy" to a tourist destination and, after its brief abandonment, can claim the distinction of being one of the world's oldest "new" towns. The city center where the sassi have been renovated, boasts 2,000 inhabitants, over a 100 hotels and B&Bs, welcomes half a million visitors a year, and is a UNESCO World Heritage Site.

Visitors can now hike and even camp in the park above La Gravina known as the Parco della Murgia Materana and take a guided tour of the churches, looking for frescoed faces on the walls. You can visit the massive chambers of the underground water cistern which was used as a subterranean boating destination for visitors before it was drained. With all the films made in Matera, there's also the potential for celebrity spotting: just around the corner from our hotel, we had coffee at the local bar next to international British celebrity Sean Bean (Game of Thrones, The Lord of the Rings).

Then there is the cuisine of Basilicata: handmade "capuntini" pasta, mashed fava beans and dried red peppers, beef stews, salamis and cheeses, and ricotta drizzled with honey are complemented by Aglianico del Vulture, the region's high quality red wine. I'd recommend Ristorante Baccanti for an upscale meal. Set in an ancient cave, the contrast of warm lighting and chic modern decoration with rough-cut stone walls is captivating. Or try Ristorante Kappador: just off the main piazza it has a friendly staff and cozy dining space as well as mouth-watering food.

For many inhabitants of Matera, the walls in the streets may be literally gone but they are still standing in their minds. Matera has gone the way of many a tourist destination – it's a well-preserved and evocative mummification of a town, sporting a festive main street full of brightly lit shops, quaint restaurants, and splendid hotels in what once were the homes of noblemen.

I am reminded of a nearby town we visited, Craco, half of which slid away in a landslide and which now lies empty, crumbling, and haunted by the memories that cling to a twisted bed-frame, a bell too large to be removed from its bell tower which was built around it, a fig tree growing through a window. We donned hardhats and tramped through the rubble and weeds. The last families who own property in the town are refurbishing it for tourists while they live in smaller, unadorned houses nearby.

Towns like Matera may not be ghost towns like Craco but they are no longer a center of local life. Work and industry has moved to the periphery, to wedding venues set in castles, dairy farms in manor houses, and tourist destinations in ghost towns. Italy and Italians are in the business of preservation, feeding the modern world's hunger for history and nostalgia where the past is polished and presented for visitors like a gleaming film set. It is certainly a world worth visiting but as a tourist, just know you won't be getting a taste of "real life" in southern Italy.

But when we're on vacation, isn't it real life that we're trying to escape? After all, the present never shines as bright as the mysteries of the past or our anticipation for the future and nowhere is that more apparent than in a town like Matera, where the dead literally lie over the living. 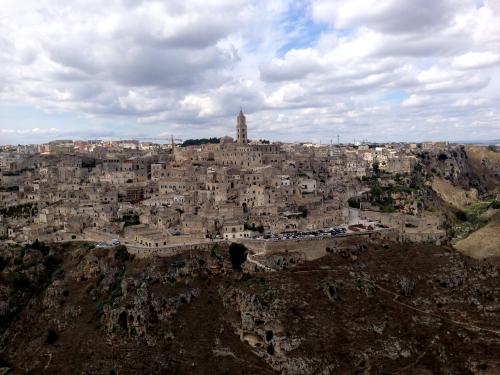 The view from across "La Gravina" 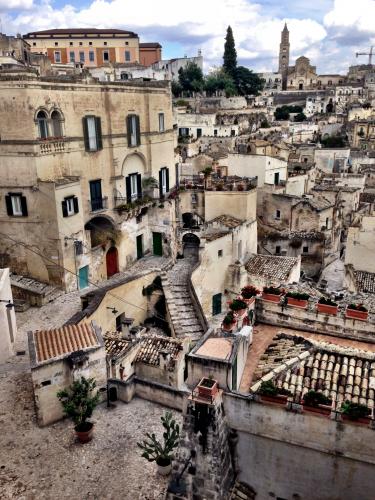