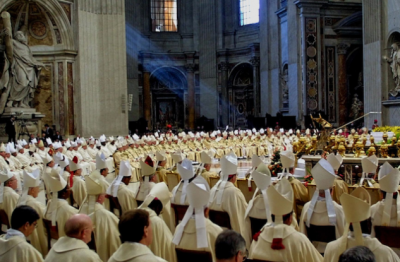 However, there was a backlash to the report as it was discussed in the Vatican on Tuesday, with some senior bishops incensed by the exclusion of the word “sin” in relation to homosexual relationships.

The report represented a marked change in tone on issues such as allowing divorced couples who remarry to take communion, and accepting gay and cohabiting couples in congregations. However, significant changes in doctrine may not issue from the report, which instead placed a focus on making “courageous pastoral choices”, indicating an emphasis on individual priests following their own consciences.

Cardinal Peter Erdo read the report of some 5000 words to huge applause from assembled bishops on Monday.

With regard to homosexual relations, the report upheld the Catholic prohibition of same-sex marriage, saying that such unions “could not be on the same level as marriage between a man and a woman.” Despite this, it called for the church to recognise that “homosexual people have gifts and qualities to offer to the Christian community… often they wish to encounter a Church which offers them a welcoming home.”

For the divorced, the suggestion of “new pastoral paths” has led to speculation that the Church may be close to allowing divorcées who subsequently remarry to take communion.

The report also demonstrated a potential softening towards cohabiting couples. Whilst priests were encouraged to reignite a dialogue about the importance of religious marriage, it was recognised that in many cases of extreme poverty “getting married is a luxury.”

The overall tone of the report was compassionate, centred not necessarily upon changing the teachings of the church but in practising them with less rigidity than has previously been the case.

One area in which the report showed no change was in contraception, maintaining the church’s stance on only allowing “natural” methods.

The synod continues until Sunday when a final report will be issued.