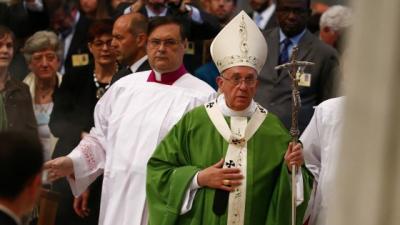 VATICAN CITY – Allowing divorcees who remarry to take communion will be one of the issues in contention at a synod of 200 Roman Catholic bishops at Saint Peter's.

Controversial topics such as divorce, contraception, extra-marital sex and homosexuality will come under discussion. The church faces pressure after a global survey instigated by the Pope last year revealed that a large part of Catholics worldwide do not follow Church teachings on matters such as contraception. This synod will seek to address the gap between doctrine and the realities of contemporary life.

The international movement ‘We are Church’ welcomes the synod and the survey as signs that under Francis’ leadership a dialogue is finally being opened up within the Church hierarchy on the most pressing issues for modern Catholics. They call for “a new approach to homosexual partners and divorced and remarried couples – not only out of mercy but out of justice.”

However, seismic changes in Church teachings are not expected to emerge from this synod. At most, progressives hope that divorcees who remarry will be allowed to take communion, a move fiercely opposed by some bishops. Cardinal Peter Erdo, speaking to the synod, said "divorced people who remarry belong to the Church, they need and have the right to be supported by their priests."

‘We are Church’ points out the lack of representation for women at the synod, and is also concerned that the majority of Cardinals and Bishops in attendance were appointed by the previous two popes, who were far more traditional in their stance.

The pontiff officially opened the synod at a general mass in Saint Peter's on Sunday. In a speech he called upon the attending bishops to speak frankly and openly, speaking of his awareness that in the past “some cardinals lacked the courage to say certain things, out of fear of the Pope, out of fear that the Pope thought differently: this will not do.”

The synod is expected to focus upon practical approaches to pastoral care in these controversial areas, rather than directly challenging Church teaching. As well as these two weeks of debate, the synod will reconvene in October 2015 for further discussion.