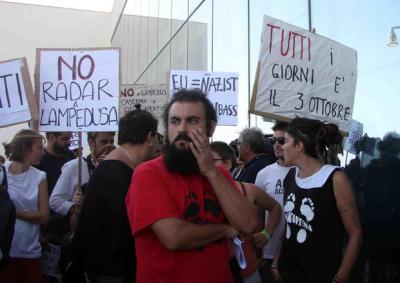 LAMPEDUSA – A memorial service was held on Friday on the island in honour of the 366 people who lost their lives in the shipwreck which took place Oct 3 2013.

Crowds of protestors gathered at the airport on Lampedusa as officials arrived for the anniversary commemorations. Residents of the small island bore placards reading “Every day is Oct. 3” and “Lampedusa is not an open air barracks.” The island lies much closer to Libya than it does Sicily in the Mediterranean, consequently attracting a large number of migrant boats to land on its shores.

European Parliament Speaker Martin Schulz was heckled as he spoke at the ceremony, “You lot are guilty, you are the killers,” shouted one protestor.

During the past year the Community of Sant’Egidio, a Catholic movement activein interational affairs and conflict areas, has been working with survivors of the wreck to try to piece together the identities of the victims, many of whom came from Libya, Eritrea, Somalia and Ghana, as well as other African countries.

Presiding over the prayer vigil was Cardinal Antonio Maria Vegliò, president of the Pontifical Council for Migrants. Also in attendance were many of the 150 survivors of the shipwreck, as well as victims’ family members. One survivor, Luam, spoke of the great pain which returning to the island caused him, but explained that he felt the need to do so for the sake of those who died.

The organisation has commemorated many such incidents over recent years, they believe it is important to “entrust to God the names and stories of these people who died on voyages of hope.”

In recent weeks Italy has faced criticism from the international community for failing to prevent these tragedies. In the year since the shipwreck off Lampedusa many more hundreds of migrants have died in similar circumstances.