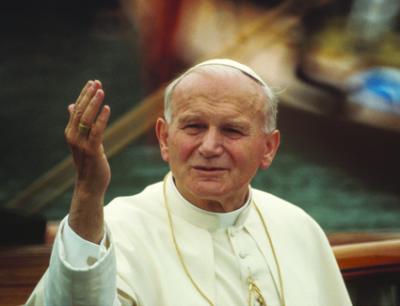 VATICAN CITY — John Paul II’s funeral six years ago drew more than 2 million visitors to Rome, some of whom urged his successor to “make him a saint immediately”.

Pope Benedict XVI appears to have heeded their request and on May 1 was to pronounce him “blessed”, the first major step on the path to sainthood and the quickest such promotion in modern times – beating Mother Theresa of Calcutta by 15 days.
Attendance at John Paul’s beatification was expected to provide a measure of the Polish pope’s enduring popularity.
Recently authorities in Rome appeared to reduce their estimate of the number of visitors, with the Vatican’s travel organization Opera Romana Pellegrinaggi saying it expected to assist some 300,000 pilgrims on the day of the ceremony.
Experts said there were too many variables to make a reliable forecast, with fine weather apt to bring out large numbers of Romans.
“The business community has high expectations of a boom in sales, both of books and souvenirs,” said Giancarlo Coletti, the owner of one of the biggest Catholic bookshops on Via della Conciliazione, the broad avenue leading up to St Peter’s Square.
“Hopes may be exaggerated, as happened with the Holy Year in 2000, but there will certainly be lots of people.”
John Paul’s popularity has not been eclipsed even in death, Mr Coletti said, and – unlike his predecessors – his memorabilia continues to sell alongside that of the reigning pontiff, Joseph Ratzinger of Germany.
“He was the first foreign pope after four centuries of Italians, from a Catholic nation that has been a victim of history,” Mr Coletti said.
The 27-year duration of Karol Wojtyla's papacy, his role in the defeat of communism and his tireless global travel all contributed to a legacy of popular affection, as did his fondness for skiing and swimming – unusual leisure pursuits for a pope.
“He captivated Catholics and non-Catholics alike,” Mr Coletti said.
A Sikh souvenir vendor running a nearby open-air stall agreed. “He was very different from Benedict, more charismatic. He was a friend to everyone, to Muslims, Jews, Hindus and Sikhs,” the vendor said, declining to give his name. Demand for John Paul II memorabilia far outstripped that for his successor, he said.
“He was perfect for the role,” added his Jewish colleague, Giacomo, with a stall at the entrance to St Peter’s Square. “He always had a great following among the young. I don’t know whether the present Pope will manage that.”
Some Catholics feel uncomfortable about the rush to beatify Wojtyla, with the memory of financial and sex abuse scandals that festered under his pontificate fresh in people’s minds.
“People take the view that a single generation should not pass judgement on something like this,” said Farley Clinton, an American journalist who covered John Paul’s papacy.
Mr Clinton attributed John Paul’s popularity to his early training as an actor, which enabled him to bestride the world stage with confidence, and to the restraint he showed in the ideological struggle in Cold War Poland.
“It was amazing how peaceful that transition was. Even the Russians got to like him. They found they were dealing with a reasonable, fair man.”
Another veteran Vatican observer, who asked not to be named, said the Pope’s reputation for personal sanctity had trumped his weaknesses as a governor of the Church.
“In 27 years he didn’t change a nail in his personal apartment. Ratzinger has had it completely refitted, with German kitchen equipment and electronic devices everywhere,” the Vatican expert said.
“I’m on the board of a convent that has 150 rooms for rent. On the day the beatification was announced they received 76 booking enquiries,” he said. “That gives you an idea of the groundswell of popular support. Vox populi, vox Dei.”
Saverio Gaeta, author of the book “Why he is a Saint”, said the fast-track beatification meant Vatican investigators were able to benefit from eyewitness accounts of the Pope’s life that might not have been available if the process had been delayed.
John Paul’s prayer life was so intense that he sometimes used to seek refuge in a broom cupboard at his summer residence in order to pray undisturbed, Mr Gaeta said.
Not everyone participating in the beatification is so saintly.
The consumer organization Codacons says some hotels in central Rome have raised their prices from under 200 euros a night to 1,000 euros a night for the beatification weekend. And fraudsters have been selling tickets for the ceremony – which doesn’t require a ticket and is free of charge – for up to 100 euros.
“Bars and restaurants near St Peter’s are liable to increase their prices that weekend. The same thing happened when John Paul died,” warned Stefano Zerbi, a Codacons spokesman.
Whatever the hazards, a large number of people are likely to confirm their belief in John Paul’s saintliness by turning up in person in St Peter’s Square.