Pope Francis calls for an end to racism against migrants 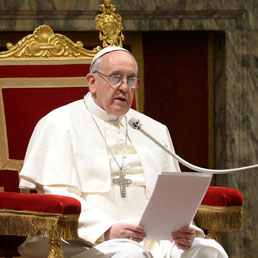 VATICAN CITY – In a message delivered at a conference on Migration and Development in Mexico City 12-16 July, Pope Francis called for an end to racism against migrants and for new rights for all refugees.

During the conference, which takes place 12-16 July, Francis said that “the increasing migration in all continents and almost all countries cannot be seen as an emergency or as a circumstantial and sporadic event, but as a challenge to our societies.”

The pontiff continued by explaining that as well as posing challenges, migrants also bring promises. He condemned any racist and xenophobic attitudes and reiterated his message from the 2013 World Day of Migrants and Refugees.

He asked for a change in attitude from all, and for “a switch from an attitude of fear and defence, of disinterest and discrimination – all typical of a throwaway culture – to attitudes based on a ‘culture of encounter,’ the only culture capable of building a better, more just and fraternal world.”

The pope then continued, “many people who are forced to emigrate suffer and, often, die tragically; many of their rights are violated, they are obliged to be separated from their families and, unfortunately, continue to be the subject of racist and xenophobic attitudes.”

The pontiff also demanded greater protection for unaccompanied minors who are migrating to the United States from Central America and Mexico. It is a “humanitarian emergency,” according to Francis, and calls for urgent action.

“These measures, however, will not be sufficient, unless they are accompanied by policies that inform people about the dangers of such a journey and, above all, that promote development in their countries of origin,” the pope said.