Frequent Flyer for the Faith 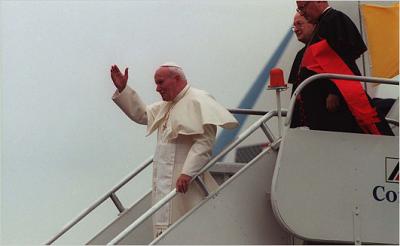 No one was prepared for the dizzying pace of Pope John Paul II’s global travels as the Polish pontiff’s beatification in the Vatican approaches.

VATICAN CITY –  On return from one of his many African expeditions Pope John Paul II admitted there was something excessive about his trips but added “that’s often the case with Providence.”

In his constant travels he was a startling contrast to Pius XII who reigned during and after the second world war.  The world came to Pius XII.  His successor John XXIII made news simply by taking a train trip to Assisi. The next pope, Paul VI, moved further and faster. In six years he went to all continents but no one was prepared for the dizzying pace John Paul set from 1979: 104 trips beyond Italy, in many of which he visited several countries.

Vatican journalists have reasons to be grateful to John Paul for not only did he provide copy for 27 years but enabled them to see,  however fleetingly,

unexpected corners of the world.  They were pampered on the papal plane, their outlets had to pay through the nose for that news opportunity but they worked hard : they had to be at sites before the papal party and then write and transmit their reports after it had returned to its residence.

The trips were stressful.  When John Paul took in five other countries on his visit to Australia in 1986 he seemed below par on arrival in Bangladesh.  In Dacca some of the Catholics who had walked for days to hear him were disappointed that he kept to his prepared speech without any improvisation.  He seemed flat at a reception at the Presidential Palace where a female choir sang a series of songs written by the President.  When John Paul responded to the gift of a giant key to the city he paused endlessly before naming it.   It was feared he would say New Delhi but at last came out with Dacca.

The papal party zoomed into Singapore where he gave a more forceful talk, then Fiji where the Governor-General, from the reception dais, announced that three Fijians in the U.N Peace Keeping Force in Lebanon had just been killed.  The papal party made no response.  Several jet-lagged members were dozing and John Paul presumably did not understand the Governor General’s English.  Some parts of the papal trips were more successful than others.

By the time the papal party reached Sydney John Paul was hitting his stride.  After the end of another long day, he had the energy to start impromptu dances with young people.  His hands had acquired the texture of balsa wood from pressing flesh.
One journalist asked whether he considered  his visit to Australia like that of the Queen.  He said the difference was that “he brought Christ.”

Some suspected that another motive was to get away from the Vatican.  From the start of his pontificate he made it clear the was determined not to be trapped there but another motive was to dramatise his message.  Rather than speaking from the Vatican it was more effective to champion aborigines from central Australia, talk about the slave trade from an African port or condemn war from a bombed site in Japan.

He regarded himself as the parish priest of the global village.  However some saw his trips as an extension of overbearing Rome but they helped “confirm his brothers in the faith”, convince Catholics that they were not the last Indians on the reserve.

Some compared his arrivals by helicopter with Apocalypse Now while the Nobel Prize winning novelist Patrick White said the pope should have sequins on his helicopter.   I think John XXIII was an even better communicator but John Paul had a wider range and hit the moment when television was at its global peak.  He had an uncanny empathy with television.

But the razzmataz was not an end in itself. Experience of Nazism and Communism had convinced him that denial of God leads to dehumanization.The trips’ showbiz helped him convey his basic message “Be not afraid.  Open your doors to Christ.”

This was not obvious to all.  What is he doing in Khartoum, a newspaper editor asked, or in Azerbaijan which had 120 Catholics.  An Italian Jesuit queried the utility of brief trips which he called “passing showers.”

But showers are sufficient to make seeds sprout.  And in some countries they were repeated – John Paul visited Poland nine times, France seven, the United States, Mexico and Spain five, Brazil, Poland and Switzerland four times, Germany, Austria and Canada three times and so on.

His visits to Poland convinced Poles that changes could be made even if few imagined the extent of them. His speeches there were a firm assertion of rights without being incendiary.

He relished cultural diversity. He was enthusiastic about danced liturgies in Africa which bemused some of his collaborators; the name they gave him in New Zealand — the Lone White Heron –  seemed to fit like a glove; at a ceremony in Columbia a local priest silenced an Indios engaged in a longwinded account of persecution from Spanish conquerors and landlords abetted by clergy but John Paul asked him to continue, then embraced him.

In Marcos’ Philippines (where he was saved from an assassination attempt) and several other dictatorial regimes he spoke forcefully against oppression.  In Santiago, Chile, however, probably he was ill-advised to appear beside General Pinochet.  His Nicaragua visit is identified with him wagging his finger disapprovingly at the priest-poet Ernest Cardenal, because he had become a Sandinista government minister, and later telling the Sandanistas who contested him during Mass to shut up.  On many occasions he lived up to an American description of him as “the kind of incandescent leader the world hungers for.”

World Youth Days, which he inaugurated, had a particular place among his trips symbolising his commitment to youth and the future. They brought a reassuring response — crowds estimated at two million attended in Paris and Rome. There  were said to be five million in Manila.  As one of his trip organisers, Father (now Cardinal ) Roberto Tucci said “John Paul begins to fire when there are a few hundred thousand.”

He did not manage to get to Moscow or Beijing even though someone commented “God is everywhere but John Paul has already been there.”
The last earthly trip John Paul ever took was to Lourdes.