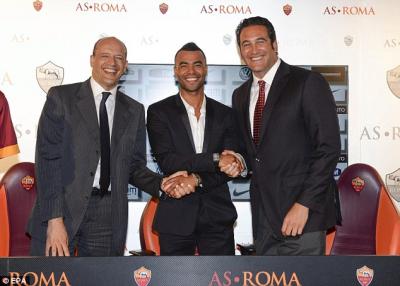 ROME-After being released from Chelsea FC the former England international Ashley Cole has signed a two-year contract to join Roma next season which will net him £3.65 million in wages.

Cole has expressed his excitement to join the Italian Serie A league; “Happy to have signed my contract at Roma. Just want to thank everyone for your lovely messages. Will never forget my time in England, it was a pleasure, but now onto a new challenge.”

The ex England player, who arrived at Fiumicino airport in the early hours of Monday morning in a dark blue suit and sunglasses, was greeted by hundreds of Roma fans. The Italian club also posted a photo on their Twitter feed with the caption: “Welcome to Rome, Ashley!”

Cole signed his contract-which will see him hitched to Roma until June 30th 2016-at the Trigoria headquarters with CEO Italo Zanzi and general director Mauro Baldissoni. He is the tenth Englishman to move to the Italian Serie A league after David Beckham who transferred to AC Milan in 2008.

The 33 year-old has said his aim whilst playing at Roma will be to boost the Italian side, which jumped from 6th place to second, last season.

Roma has also signed a second player, Salih Ucan, to join Cole and the rest of the squad in 2014, who is due to arrive in the Italian capital from Fenerbahce. The Turkish player has signed a one-year loan for £3.8 million with the option to extend it for a second year with no further cost.