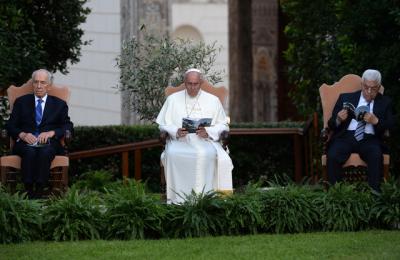 VATICAN CITY-Pope Francis’ meeting with the presidents of Israel and the Palestinian authorities “made a strong contribution” to achieving peace, said spokesman Father Federico Lombardi on Monday.

The Pope welcomed Israeli President Shimon Peres and Palestinian leader Mahmoud Abbas to the Vatican gardens this weekend. During the prayer that took place on Sunday, Pope Francis repeated the cry of “no more war. To make peace takes courage, much more courage than to make war”, the Pope also said.

According to the Vatican spokesman it was “an act of courage against timid realism.” Father Lombardi further added, “It was a moment of liberation, of people who sincerely desire peace but have trouble finding the way.”

Shimon Peres referred to Pope Francis as a "builder of bridges of brotherhood" and described the event in the Vatican as a "moving occasion."

Pope Francis also tweeted to urge the public to join the prayers; “Today I ask everyone in good will to join us in praying for peace in the Middle East”. The tweet ended with #weprayforpiece