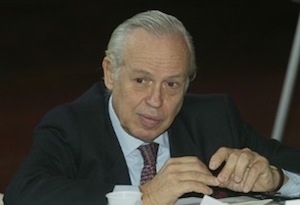 ROME  - “An era can be said to end when its basic illusions are exhausted” is a phrase from Arthur Miller which applies well to the European elections that have just ended. What those elections showed was that disenchantment with Europe as an ideal has grown to a dangerous point.

It is true that the European elections have been always more about domestic national issues than Europe. They were moments to check how national parties were rated by the electorate, with its government as the first to be judged.

But this is the first time, since the birth of the European project, that a remarkable part of the electorate has coalesced on parties which identity themselves as enemies or sceptics of Europe.

And of the percent who voted for pro-European parties, the large majority does not look on the embodiment of the project – the European Commission – with much sympathy.

According to the Eurobarometer, those with a positive opinion of Brussels fell from 72 percent in 2000 to 37 percent last year. If the present trend continues, in the next European elections there will be only one European in three harbouring some faith in the European Commission and, by extension, the credibility of European construction.

Much has been written on the disenchantment which has ushered in 20 percent of the members of the new European parliament who are, in fact, internal enemies of the institution itself.

It is in fact the programme of austerity imposed by the European Commission (under German instructions) which has given a terrible image of Europe, especially to the millions of unemployed young people.

It is true that the Eurocrats have appeared more and more unaccountable and isolated, in a maze of bureaucratic rules: it is also true that the leaders that member states have conveniently installed have lacked charisma and never connected with the people.

But the real problem is much simpler, and much more tragic: the sense of solidarity and common destiny which accompanied the birth and growth of the European project has disappeared.

The creeping code word which has accompanied this Commission for the last four years, has been “reappropriation.” Governments, strong or weak, have all been looking to the European supranational space as something from which to recover as much as possible.

In the last four years, Germany has simply ignored any element of solidarity with the other European countries, and looked only to its interests. German Chancellor Angela Merkel is the strongest European politician, but dedicated basically to German interests.

Reports abound on how the absolute priority behind the aid given to Greece, Ireland and Portugal was to refund the loans by German banks, and only after that directed to the national priorities of the recipients.

The German balance of payments is another excellent example of how Germany does not care about the internal imbalance its present policy is creating in Europe. Simply said, everybody buys from Germany, but Germany does not buy from anyone.

Some analysts think that the policy is not directed towards Europe. They argue that Germany wants to be a big Switzerland, and is not participating in any international policy. It has kept out of all important decisions, from Libya to Syria, and on Ukraine it has been considerably silent. But Germany’s self-centred participation in Europe is now the rule, even with the weaker countries.

A good example is the tragedy of immigrants, now basically heading for Italy, which now number several thousand per month. In 2013, the official count was 140,000 people. They emigrate because there are no functioning states in many Arab countries, which have also themselves become sources of emigration, like Syria. An estimated 25,000 have left Libya alone. While it is difficult to count how many have lost their lives during the crossing of the Mediterranean, a common estimate is over 7,000.

The reaction of Europe has been total indifference. Italy is spending close to 100 million euros on rescuing the immigrants, and any appeal for solidarity has fallen on deaf ears. Maybe now, Matteo Renzi, the Italian Prime Minister, who chalked up the greatest success of all European leaders, will be able to change the situation.

But what it is important to stress is that the European Commission has not lifted a finger, citing the lack of support from member countries (read Germany and the other Northern countries.) When it came to rescue Greece, which represented two percent of the European budget, it was considered necessary to punish people who lived beyond their means, and who falsified the budgets that they presented to the European Commission. Then, the same was said for Ireland and Portugal (a very doubtful claim because both countries were in a totally different situation.)

Nobel Prize-winner economist Paul Krugman noticed that it was the first time that economy had become a branch of morality, and that in German sin and debt use the same term. Not only there was no solidarity, there was a campaign about austerity as the moral compass necessary to build a sound macroeconomic situation. People, of course, are part of microeconomics: but they have been consistently ignored, in favour of banks, for which all the funds necessary for the big bail-out were found.

The issue of immigration is the best example for understanding that the crisis of Europe is a crisis of values, which are well written into the various constitutions and are part of the rhetoric of European identity. Beyond solidarity, those values were social justice, participation and accountability. On those four counts, the European Commission is largely absent. And today it would be very difficult to find a European citizen who feels obliged somehow to other European citizens.

The same can be said about American, Russian, Indian or Chinese citizens … but they have common structures which take care of redressing regional inequalities and helping general development. This is not the case of Europe, which has only one real element of unity: the euro, which is as inspiring an ideal as a banknote!

Then there is quite a difference in the realities of the north of Europe and the south of Europe. Germany has now over 10 million immigrants, and receives more of them than the United States. But German industries and the economic world know well that without immigrants Germany would no longer be competitive.

According to UN projections, Europe needs to receive at least 20 million immigrants over the next ten years to remain economically competitive with United States, whose immigrants keep the working population in constant balance. Yet, what has been the lesson of the last elections? That the anti-immigrant theme was so strong that it propelled close to 50 parliamentarians to the Europarliament. In every crisis there is the search for a scapegoat, but then let us abandon the European rhetoric.

It is anyhow clear that if there is not a radical change of the way in which Europe is perceived by its citizens, the next elections will be even more negative for the European project. Now for the first time, the Europarliament has a voice over the nominations of the new European Commission. Possibly, countries should no longer be able to place obscure people at the helm of the institutions – previous elections have brought to the forefront figures barely legitimised by the will of citizens.

Yet, it will be interesting to see if governments do not find a way to bypass this indication. And anyhow, it is not a question of revolutionaries coming to the fore.

Suffice the case of Jean-Claude Juncker, former prime minister of Luxembourg. When he was still prime minister and chairman of the Economic and Financial Affairs Council (ECOFIN), which brings together the economic and finance members of the European Union, he famously opened a meeting saying: “We heads of government all know what to do, we just don’t know how to get re-elected when we do it,” very much in the vein of Bundesbank President Jens Weidmann, who said: “If I please the Frankfurter Allgemeine Zeitung, I am the ruin of Europe; but if I please Europe, I lose the support of Germany.”

Maybe the new value for European identity is realpolitik.